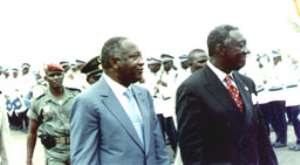 Ghana's President John Kufuor has traveled to Abidjan in an effort to defuse tensions in Ivory Coast ahead of a planned opposition protest.

At his arrival, Mr. Kufuor said it was important for the region that Ivory Coast does not slip back into violence and instability.

Opposition parties are planning a major demonstration Thursday in Abidjan in favor of a January 2002 French-mediated accord, which has yet to be implemented.

Late Tuesday, President Gbagbo spoke on national television, calling for the organizers to call off the protest.

He says Ivorians should not endanger the peace process at a time the international community is about to send U.N. peacekeepers, with deployment scheduled to begin next month.

The president said the implementation of key provisions of the French-mediated peace agreement, such as easing nationality requirements, should be submitted to a referendum and other clauses must be approved by the parliament.

But opposition parties said their protest march will go on as scheduled.

A leading member of the former ruling party known as the PDCI, Thiemele Boua Edjampan, said the march will be peaceful.

"Democracy means we have the right and freedom to go where we want to go to put your own conviction in front of the population," he said. "We have decided not to go for confrontation, but for a peaceful manifestation."

But even Abidjan residents who agree with the opposition say they will not participate in the protest for fear of violence.

Rebels of the New Forces, who control the north of the country, said they also will not attend the march in Abidjan. Instead, they are asking their supporters to take to the streets in the main rebel-held northern cities of Bouake, Man, and Korhogo.

Additional troops have been deployed in Abidjan ahead of the march, and police officials have anyone near the presidential palace will be considered as enemy combatant.

Ivory Coast, once a bastion of stability in western Africa, has been split in two since an uprising by mainly northern officers in September 2002.