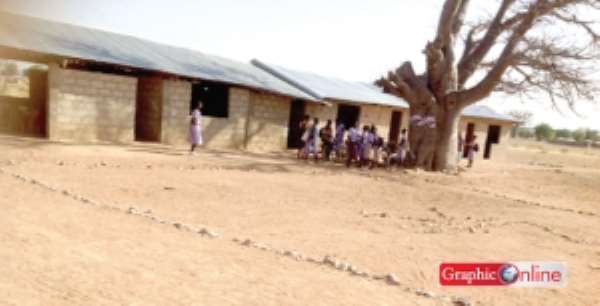 The desire of the head pastor of the Fountain Gate Chapel (FGC) at Winkogo in the Talensi District, Pastor John Adengba,  to retain his converted young souls has paid off, with the establishment of a private school that promises relief to the falling standards of education in the community and the district at large.

The school, Fountain Gate International School (FGIS), Winkogo, was established in 2004 and its maiden candidates for the Basic Education Certificate Examination (BECE) were adjudged the best in the district in the 2012/2013 academic year.

Its best student in the examination, Master Raphael Namkena Tee, has also been selected as a prospective recipient of the Presidential Award for Best BECE Candidate for the 2012/13 academic year for the region.

That makes FGIS, Winkogo, the first  private school in the district to have produced a candidate for the prestigious award, an achievement Pastor Adengba said was heartwarming.

"It is a big honour to the school for Raphael to have been selected. My prayer now is for God to give us favour so that he will be chosen to represent the region in the upcoming awards," an elated Pastor Adengba, who is also the director of the school, said in an interview.

Formation of FGIS, Winkogo
Recounting the events that led to the establishment of the school, Pastor Adengba said the gesture was in response to an urgent need for solution to the rampant dropout of junior high school (JHS) graduates from his church.

"I realised that young people who couldn't make it to the senior high school (SHS) left the community and went down south. Upon return, their faith in Christ was lost. Averagely, five of them or more were affected and that meant that I was losing five young souls annually," the 59-year-old pastor told the Daily Graphic in the church auditorium, which doubles as classrooms for some of the lower primary pupils.

"To me, that was a serious problem and so, I, together with my wife, Mrs Mary Adengba, decided to come up with some solutions in the form of a school that can give proper moral and academic tuition to the young ones in and outside the church," he added.

After that deliberation with his wife, Pastor Adengba said the idea of replicating FGIS, Bolgatanga, which the founder of FGC, Reverend Eastwood Anaba, established, came to mind, hence the establishment of FGIS, Winkogo, on September 7, 2004.

The school, which started with 28 students, currently has over 200 students in the nursery, primary and JHS.

Infrastructure challenges
Despite the distinctive academic prowess of the school in the community and district at large, its structures are nothing to write home about.

Apart from the church auditorium, which is an enclosed building with windows and zinc roofings, the structure that hosts majority of the children, including the JHS, does not befit the status of a classroom block.

Its windows and doors are not fixed, thereby exposing the students to the harsh climatic conditions, including the sun rays, harmattan haze and intermittent rains.

He called on institutions and persons committed to raising the falling standards of education in the community and the district to support the school explaining that although the vision behind its establishment was to help retain young converted souls within the Winkogo branch of FGC, it had now grown to benefit the entire district.