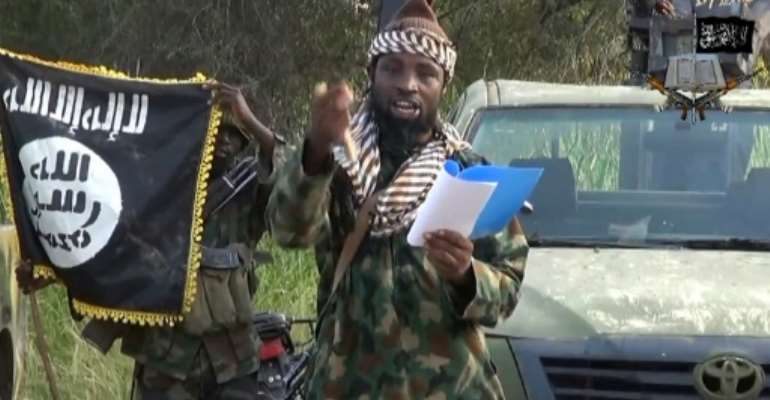 A video image of Abubakar Shekau, leader of the Nigerian Islamist extremist group Boko Haram, which has carried out deadly attacks in the country's northeast as well as parts of Cameroon, Niger and Chad. By - (Boko Haram/AFP/File)

Kano (Nigeria) (AFP) - Military operations against Boko Haram could be extended, Nigeria's President Muhammadu Buhari indicated on Monday, as a government deadline approaches for the end to conflict.

Buhari in August gave his military commanders until the end of the year to stop the insurgency but with just weeks left there has been no let-up in violence in Nigeria and neighbouring countries.

In a message sent to army top brass meeting in the northern state of Jigawa, and read out by chief of defence staff General Abayomi Olonisakin, the head of state said the self-imposed December 31 deadline was only "a guide".

It read: "Let me emphasise that the timeframe should serve as a guide and if exigency of multiple operations across the country advises a modification, the federal government will not hesitate to do so in order to address new flashpoints that are rearing their ugly heads in some parts of the country."

The statement will likely be seized upon by Buhari's opponents as backpedalling, with suicide and bomb attacks still prevalent in the northeast.

Last month, even senior military, security and intelligence figures, from the research and advisory body the Centre for Crisis Communication, said the deadline was "unrealistic".

Security analysts say the military counter-insurgency has been effective in pushing the Islamists out of captured territory and reducing the group's capability to attack.

But there have still been sporadic deadly raids in the region, as well as attacks in northern Cameroon, southeastern Niger and on the Chadian side of Lake Chad, where all four countries meet.

On Saturday, at least 27 people were killed and more than 80 wounded when three suicide bombers struck on an island on Lake Chad.

Buhari, a retired army general and former military ruler, told AFP in an interview in September he expected an end to "the main conventional attacks" by the deadline.

"What may not absolutely stop is the occasional bombings by the use of improvised explosive devices. We do not expect a 100 percent stoppage of the insurgency," he added.