UN to airlift aid to hungry in Central Africa 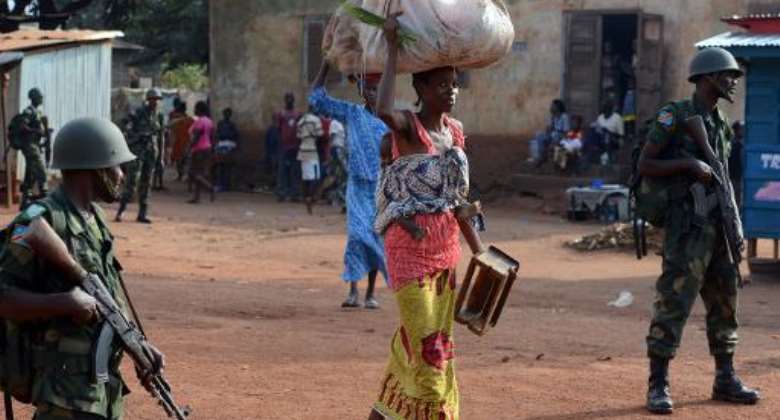 MISCA peacekeepers patrol in a street in Bangui on Febuary 4, 2014. By Issouf Sanogo (AFP)

Geneva (AFP) - The UN's World Food Programme said Tuesday it was running out of food aid to distribute in the conflict-ravaged Central African Republic and would begin flying in supplies from Cameroon.

"The date when the air bridge will open has not yet been set but it is imminent," WFP spokeswoman Elisabeth Byrs told reporters in Geneva.

The country is on the verge of a "food security crisis," and the UN agency's food reserves in Bangui are currently "very, very low," she said.

Byrs said a jumbo jet would make a round-trip daily carrying up to 100 tonnes of food, with the aim of flying in 2,000 tonnes of mostly rice by the end of the month.

It is five times more expensive to bring food in by air than by road, but the air bridge was necessary since truck drivers transporting WFP supplies had since early January balked at crossing the border without escorts.

It was only at the end of January that the African-led International Support Mission to the Central African Republic (MISCA) first provided an escort, allowing 10 trucks to reach the capital Bangui.

A new escorted convoy was expected to reach the capital on Tuesday, but it was unclear how many of the 43 WFP trucks still stuck at the border would make it to Bangui, Byrs said.

As of last Thursday, she said, only 120 tonnes of grain remained in WFP's Bangui warehouses -- far from enough to help fill stomachs even in the capital, where more than 500,000 people are now believed to be homeless.

Last October, the UN estimated that 30 percent of households in Central Africa, or about 1.3 million people, were "food insecure".

And during an assessment of 86 communities in the country in late October, WFP found that the average number of daily meals had dropped from between two and three to just one.

"There is no doubt that we're on the verge of a real crisis," Byrs told AFP, adding that the scarce access to food had already sent prices soaring.

Making matters worse, the rainy season is also about to begin, she said.

The impoverished former French colony descended into chaos last March when rebel forces overthrew the president, but an interim government lost control of the country.

Rival Muslim and Christian militias are now battling each other and rogue checkpoints have been set up on nearly all main roads.

Despite the presence of French and African peacekeeping troops, violence continues to rock the country, and has already forced about a fifth of the population of 4.6 million from their homes.

On Tuesday, a spokesman for the UN's humanitarian agency called on donors to loosen their purse-strings, saying only 11 percent of the $551 million (408 million euros) requested for aid to Central Africa this year had been funded so far.