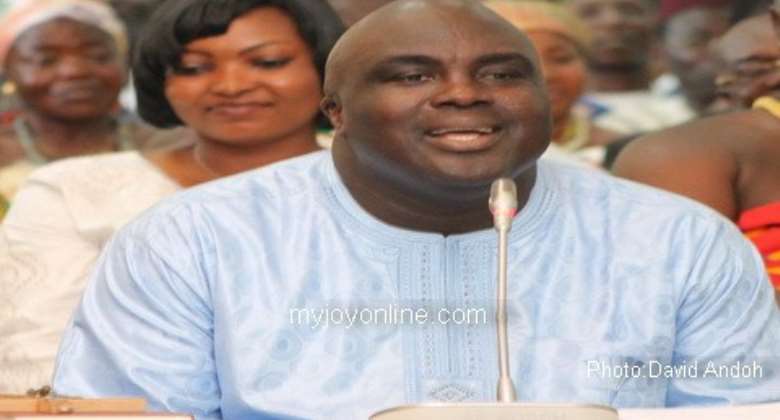 A woman who extorted GHC 2,000 from the Greater Accra Regional Min­ister, Julius Debrah, has been granted bail in the sum of GHC10,000, with two sureties by an Accra Circuit Court.

The court ordered that the sureties must reside in Accra with a fixed place of  abode.

Madam Jemima Dufie Ayikpa, 28, a resident ofTaifa, in the Greater Accra Region is said to have alleged that Mr. Debrah was the father of her two children whom he denied responsibility.

Prosecuting, Chief Superintendent of Police, Duuti Tuareka told the court, pre­sided over by Mr. Francis Obiri that the complainant, Mr. Julius Debrah was a former boyfriend of the accused, Jemima Ayipa 28, but the relationship did not last longer.

He said few months after their relationship had ended, the accused informed the complainant that she was pregnant, to which he denied responsibility.

He said the accused in view of the denial by the complainant, started embarrassing him in the attempt to cause him his job but did not succeed.

Chief Superintendent Tuareka said in 2012, Madam Ayikpa, on hearing that the complainant was contesting as a Member of Parliament for the Suhum Constituency, started pestering him to give her money or else she would exposed him in the media

He said the complainant, alarmed by her threats, was compelled under the circum­stance to part with GHC 2,000 out of the GH04,1OO she demanded to trade to avoid further disturbances from her.

He said after collecting the money, the complainant never heard from the ex­girlfriend until his ministerial appointment when she re-surfaced again demanding another GHC 25,000 failure of which she would tarnish his image in the media.

True to her words, Madam Ayikpa leaked the story to  newspapers.

He said Mr. Debrah also received a text message I! [0IW J 11 ^rorn Adotey, a party activist of the National Demo cratic Congress (NDC), to the effect that the accused had agreed to accept GH010,000 instead of the GH025,OOO to end her threats against him after several negotiations, but Mr. Debrah refused the offer and re­ported the case to the Domestic Violence and Victims  Support Unit of the Ghana Police Service (DOVVSU)  for investigations,

He said after preliminary investigations, Mr. Debrah  applied to the Madina District Magistrate court to re­quest for a DNA test to determine the biological father  of the children. The court then ordered that the test should be conducted at the Med Laboratory at Madina and the result proved negative.

Later on the accused alleged that the complainant was again responsible for her second child to which the court ordered for another DNA test for both children at Sciencellet Laboratory in the presence of her lawyer and some court officials and again the result proved negative meaning that the complainant was not the biological fa­ther of the woman's children.

He said Madam Ayikpa, not satisfied with the test results, continued to threaten the complainant but was subsequently arrested by the police for investigation during which she admitted collecting GH02,000.00 but denied threatening to expose him in the media.

"It's a great time to invest in Ghana, the safest country in...
15 minutes ago