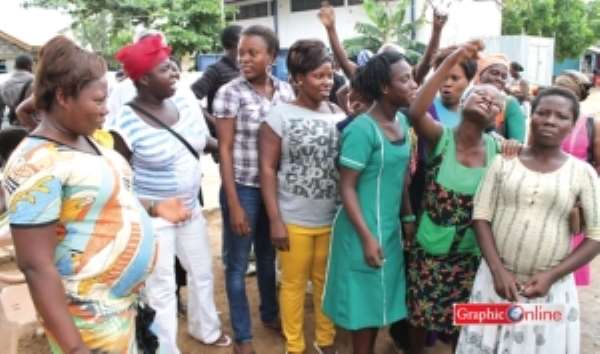 More than 100 clients of a savings and loans company, ESLOC Investment Limited, have been allegedly swindled by the company of thousands of cedis.

Doors to the premises of the company, located at Community Four in Tema, have been secured with padlocks, while the officials cannot be traced.

The victims yesterday besieged the premises of the Tema Community Four Police Station to demand the arrest of Mr Evans Kwofie, the Manager of the company.

The  District Police Commander, Chief Superintendent, Mr Victor  Amedeker, assured them that the police would investigate the case and bring the perpetrators to book.

Contract
The management of the company allegedly signed a six-month agreement with its clients but failed to honour its promise of paying two per cent interest on savings per month and a refund of the returns and deposits after the six-month maturity period.

Some of the victims, mostly women, told the Daily Graphic that they had contributed between GH¢220 and GH¢2,500 through the company's commission agents.

They said they had been contributing GH¢2 and GH¢5 per day since they registered with the company last year.

According to the victims, those who were issued with cheques for payment had the cheques rejected at the banks because the company was said not to have enough funds in its account.

Clients
Narrating her ordeal to the Daily Graphic,  Ms Agatha Nyame, 30, said since she registered with the company on   June 18, 2013, she had contributed GH¢5 every day.

She said when she went to the company's head office upon the maturity of the savings, Mr Kwofie could not execute the company's part of the agreement.

She said other victims reported the matter to the police but Mr Kwofie agreed to pay back the money by January 31, 2014.

Ms Nyame said she and the other contributors got to the office on the scheduled date only to find the premises locked.

Another victim, Mr Charles Fondoh, said some of the victims went to Mr Kwofie's residence at Gbetsile, near the Michel Camp, only to be told by the landlord that he (Kwofie) had relocated to an unknown destination.