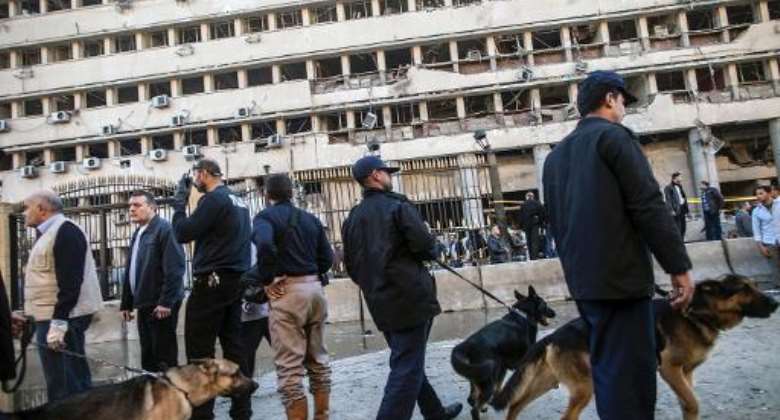 Police guard the scene of a car bomb explosion outside the Cairo police headquarters, on January 24, 2014. By Mahmoud Khaled (AFP/File)

Cairo (AFP) - A jihadist group behind a wave of spectacular attacks is a grave threat to Egypt's stability as political turmoil triggered by the Islamist president's ouster rocks the country, analysts say.

In less than a fortnight, Ansar Beit al-Maqdis (Partisans of Jerusalem) has claimed responsibility for several high-profile attacks.

These include a car bombing at police headquarters in Cairo, shooting down a military helicopter with a missile and assassinating a police general in broad daylight in the capital.

"Vengeance is coming," the Sinai-based group warned army chief Abdel Fattah al-Sisi, who is expected to stand for the presidency after he ousted Mohamed Morsi, Egypt's first democratically elected president.

The group's attacks have "made Egyptian authorities look like they were chasing ghosts", said David Barnett, research associate at US-based think tank the Foundation for Defence of Democracies.

"It is the main militant group that has the potential to escalate the destabilisation in the country."

But Egyptian security officials claim the "terrorist group is derived" from Morsi's Islamist Muslim Brotherhood which won all elections after the 2011 ouster of Hosni Mubarak.

Ansar Beit al-Maqdis is thought to have been founded primarily by Egyptians in 2011 after the anti-Mubarak revolt, with most of its fighters drawn from Sinai tribes.

In recent months the group has also seen support coming from the Nile Delta and some areas of Cairo, experts say.

Although its overall command structure and source of funding are major unknowns, two of its known leaders are Shadi el-Menei, who has eluded arrest so far and is from Sinai's Sawarka tribe, and Abu Osama el-Masry, of whom little is known.

The group is also believed to be led or backed by militants who broke out of prison in 2011 during the anti-Mubarak revolt.

The group's "early goal was to attack Israel and prevent co-operation between Egypt and Israel by sabotaging gas pipelines", said France-based Matthieu Guidere, an expert on Islamist militants.

On Friday its fighters fired a rocket at Israel's Red Sea resort of Eilat, the group said in a statement.

"On July 3 (the day Morsi was removed) the group issued a fatwa declaring the Egyptian army as infidels. From there, it turned from an anti-Israeli jihadist group to one focusing against the Egyptian security forces," Guidere said.

Its deadliest assault was a December 24 suicide car bomb that ripped through a police building north of Cairo, killing 15 people.

On January 25, as Egyptians marked the third anniversary of the start of the anti-Mubarak revolt, the group claimed it downed a military helicopter in Sinai with a missile, killing five soldiers.

"The level of sophistication is beyond what observers thought they were capable of," Barnett said of the group's ability to stage assaults outside the Sinai.

"The attacks suggest there are well experienced fighters in the group. Some of them have significant experience in fighting."

Sinai-based researcher Ismail Alexandrani said Ansar Beit al-Maqdis had procured weapons from Libya and Sudan after the fall of Mubarak.

"We can also say that some jihadists who previously fought in Afghanistan, Syria and Bosnia have joined the group," he added.

"The overthrow of Morsi's government is a prime indication for their argument that the way to success is through violence and not through democratic process," said Barnett.

The Muslim Brotherhood says that it renounced violence decades ago.

Morsi's overthrow has polarised Egypt, with Amnesty International saying that 1,400 people have been killed in political violence since last July.

Deputy interior minister Shafiq Saeed said the authorities "have arrested members from the group who have confessed that (Ansar Beit al-Maqdis) belongs to the Muslim Brotherhood", and denied that jihadist attacks had risen.

"The government is so entrenched in the battle against the Brotherhood that they appear to be losing the sight of the actual battle around them," said Barnett.

"The reality is that there is real danger from the jihadi group capable of carrying out attacks."