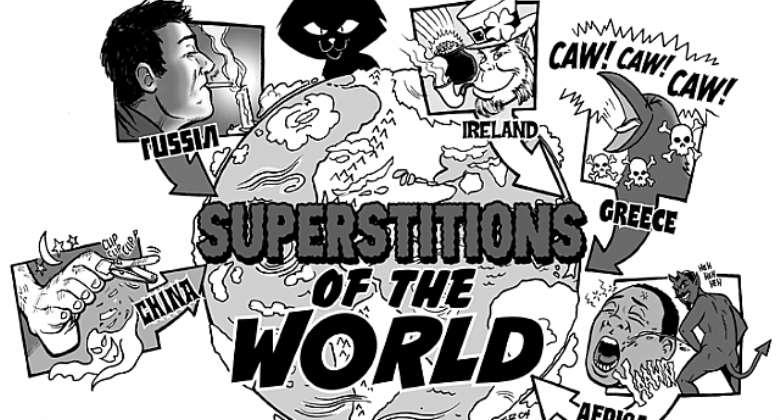 My good friend, Prekese Ghanamedia once drew my attention to a weird Daily Graphic news story, about the mysterious appearance of a Ghanaian version of a Japanese Manga (a labyrinthine magic image). A seventy year old self-proclaimed 'wizard,' Charles Atta (with a Christian name to boot) was 'found' on a river bank, a casualty of incompetent piloting. Liberty Obeng, who claimed he found him said:

"When we asked him where he was coming from, Atta told us that he was from Akuapem Akropong but was flying to Cape Coast to attend a meeting for witches and wizards."

The purpose of this article, although weird and entertaining, is to help combat social superstition in Ghana through critical examination and expose of some ignorant, backward mindsets which conspire to underdevelop our people intellectually.

Of course Atta was flying nowhere near my home city - Cape Coast. He was merely echoing preexisting superstitious notions of wizardry in the Ghanaian/African cultural consciousness. Many pseudo-spiritualists have enacted similar drama over the years.

I have seen many 'witches' displayed in Ghanaian markets. They often wear bland, possessed, and even bored looks while their 'catchers' garnish onlookers with surreal stories just before they surprise onlookers by selling spiritual potions to them. It is also interesting to note that ultimately they are always witches – no wizards, except Papa Atta who one need not reminding would never have been discovered had he been a good pilot!

There was also Professor Hindu (who later became prologue-act for Fela Kuti's band). The Sunday Times wagged the horrified tongues of its readers with a story of an 'Abotia' (magical midget) who was said to have been kidnapped into the bushes by impish white spirits for seven years. It did not take me too long, even as a boy, to notice the tell-tale inoculation marks on his left arm! Today, Kweku Bonsam plainly admits he has been selling juju talismans to Christian 'Pastors'and 'Bishops' to help them fill their churches with congregants. But he was to shoot himself in the foot when his hand tricks failed him on TV. He was as useless as a second year pupil pairing Asamoah Gyan, as leading strikers for the Black Stars at the FIFA 2014 World Cup finals!

The spiritualist world consists of dramatic flourishes of improvable, unexplainable spiritual phenomena. All these amount to mythologies. An opposing argument is posed by modern science which is based on rationalism, reasoning, empiricism (provability of social, cultural phenomena based on controlled experimentation). These opposing cultural systems have occupied the minds and actions of humanity since time.

For thousands - or even millions of years - we've been trying to understand, conceptualise and coexist with our environment. This is the basis of all the cultural mysteries humankind has faced and still faces.

While one can admit that not all social and cultural phenomena can be understood under controlled objective testing, it is plausible to believe that the scientific community - rather than religious bamboozlement - has presently managed to build a permanent space settlement station on the moon. Conversely it is clear an intellectually decrepit 70 year oldman, who childishly employed us to believe he had simply dropped from thin air while on his way to some spiritual concert, could not complete a fundamental exercise in aviation: flight! Nigerians will say, 'Norse3s!'

What is material here, is that Ghanaians/Africans must demand of their emasculated, servile, neocolonial leaders, free and available science and technology-based education – from primary to university level. This must tie-in with launching a comprehensive, science and technology-fuelled Development and Modernisation Program (DMP).

This must require an effervescent, courageous, highly intelligent leadership that is prepared to brook western imperialist opprobrium to nationalize our key commodity and industrials sectors, to fund the DMP. There is no option to the continued falling of our Cedi; and pervasive national ignorance.

The DMP must envision an industrializing society that is sustained by a manufacturing, export economy – distinguishable from the mind numbing old neocolonial, grow-harvest-and-export/dig-pollute-your-waterbed-with-mercury-export approach – that, excepting the 5 and 7 Year Development projects of, Osagyefo Dr. Kwame Nkrumah, Ghana's/Africa's successive governments have pursued.

I find it amusing that prior to the permanent space station, some ritualistic communities in the world worshiped the moon. They probably still do but – with clear distinction of the realities of science and nonscience - I believe not quite with half as much conviction.