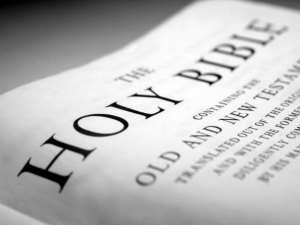 The Bible is a myth (imaginary, fictitious) document that is merely a human-led compilation of poems, psalms, saga (war stories) wisdom, proverbs and some history. No written account exists to factually back the Old Testament Bible up. There are some written human accounts of parts of the New Testament, but overall, the combined Bible was not 'god' ordained.

The aim of this article is to challenge people to examine the factual evidence that exists on the Bible, in order to discourse it intelligently rather than dogmatically or emotionally.

Francesca Stavrakopoulou is the leading expert on the Bible and Christianity. In this video she explains when, how, why the Christian Bible was invented. She explains the idea of one god was a Jewish invention to subjugate and vilify all other gods. She explains this was intentional to make their god most powerful - to legitimise themselves.

She explains the Bible was a recent invention, 7C BC. But Deuteronomy and Kings are older, not older than 10C BC. She says King David, Moses, etc are not factual figures in history. She admits Jesus was, but, 'Very, very few books were written to be included in the Bible.' The Right Rev. Michael Nazir-Ali, former Bishop of Rochester agrees with her that not every thing in the Bible is true. Because there are many genres in the Bible - there poetry, psalms, saga, wisdom, proverbs; but there is also history.

Speaking on the topic, 'Is the Bible Still Relevant today', Prof. Richard Dawkins, arch critic of religious mythology, author of the bestseller, The God Delusion says:

'The world is full of origin myths, and creation myths, and myths of all kinds. But worries me about the Bible is it has acquired in our civilisation and enormous privileged position...I objects to the way that the Judeo-Christian myth has permeated our society to such an enormous extent as though somehow it has special truths which are not to be found in other myths. I don't think there's much truth to be found in any myth as a matter of fact , but certainly there is no reason why the Judeo-Christian myth should be given this privileged status. And as for it not being literally true, of course, sophisticated theologians and historians don't think it is literally true, but 48%-45% of the American people believe literally in Adam and Eve; believe literally that the world is only 6,000 years old. I mean that is a shocking figure, and you can't duck out of it by saying oh sophisticated theologians don't believe it. Unfortunately what sophisticated theologians believe isn't really relevant to what majority of Christians do believe.' (Laud applause!).

(Monotheism, Disbelief and the Hebrew Bible, with Francesca Stavrakopoulou, ;

The Bible is mostly not factual,
;

Is it time for all religions to accept evolution?,
).

I have included video links to enable you to access, watch and share your views on the Bible openly – without 'unchristian' malice.