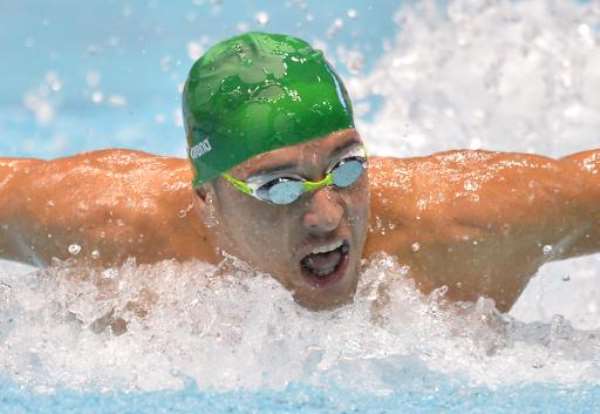 Less than six months out from the Commonwealth Games in Glasgow where he will be expected to be a major force, the Olympic gold medallist shrugged off his moderate efforts on the first day to win the men's 100m butterfly.

With AUD$500,000 ($437,000) in prizemoney up for grabs in the five-nation event over the two nights, Le Clos was disappointing in three swims on Friday.

The South African burst to prominence in London in 2012, winning the 200m butterfly by upsetting American superstar Michael Phelps, and winning silver in the 100m butterfly.

However, the 2013 world champion finished second to Japanese teenager Daiya Seto in the 200m butterfly on Friday, and was also unplaced in the 200m individual medley and 50m butterfly.

Le Clos, 21, had to come from behind in the 100m butterfly, with Australian Daniel Lester setting the early pace.

However, he appeared to win with something in reserve, having a sustained look across at his rivals as he neared the wall, touching in a time of 52.66 to just beat fast-finishing Australian Christopher Wright by 0.12sec, with a fading Lester back in third in 53.05.

The South African also placed third in the men's 400m individual medley after China's Wang Shun, who initially appeared to have pipped Le Clos to the finish line, was disqualified.

Le Clos was happy to be on the board and admitted his form had been below what he hoped.

While it was an event of mixed fortunes for Le Clos, rising star Kosuke Hagino notched his second and third wins of what was an impressive meet for the Japanese men.

Having won the 200m individual medley in a quick time on Friday, he backed it up by claiming the 200m freestyle in a time of 1:46.35, beating Australian Cameron McEvoy by 0.33sec.

Hagino then took out the men's 400m individual medley from countryman Seto, with Le Clos missing a place.

Australian James Magnussen won the blue riband men's 50m freestyle to back up his 100m success on Friday night, in a quick time of 21.88sec.

There was a major upset in the women's 400m individual medley, with Ye Shiwen beaten out of a place in the event she won gold in at the London Olympics.

Australia won the overall points tally for the meet comfortably, with Japan second.