The village at the centre of South Africa's election 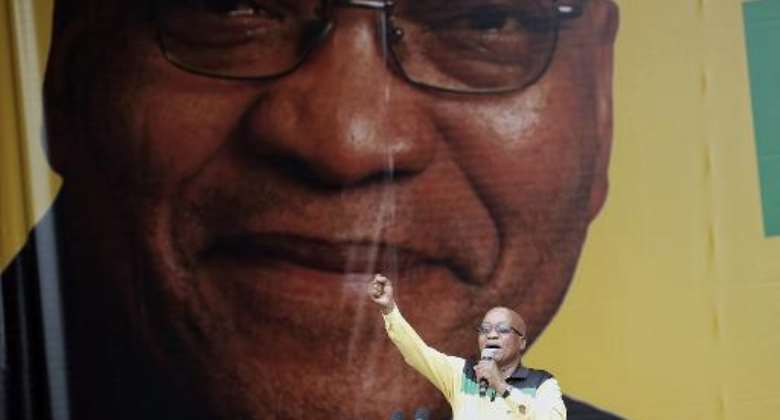 South African President Jacob Zuma delivers a speech in Nelspruit during the launch of the ruling ANC party's election manifesto on January 11, 2014. By Marco Longari (AFP/File)

Nkandla (South Africa) (AFP) - South Africa's cities will be the chief battlegrounds in the upcoming presidential election, but a remote village will cast a long shadow thanks to one notable resident and his very expensive building project.

South Africa's fifth national elections since the end of apartheid -- due before July -- are likely to be its most competitive yet.

Twenty rocky years after the end of white-minority rule, the party that has held power ever since, the African National Congress (ANC), faces fierce competition from across the political spectrum.

Pervasive inequality, joblessness, corruption and government incompetence have all sullied the party's image, leading some to predict its electoral support will fall below 60 percent.

But the ANC's real Achilles' heel on election day will be its leader, President Jacob Zuma, and his $20-million taxpayer-refurbished compound in the village of Nkandla in the rural south of the country.

Nestled among Nkandla's verdant rolling hills and simple round huts, a cluster of more than a dozen much grander buildings stands out.

This is no luxury bush lodge, this is "Zumaville", the president's private residence.

Behind a military-grade security fence are bulletproof windows, a bunker, a swimming pool, a helipad and a private clinic.

The home -- which Zuma rarely visits, as he has official residences in Pretoria, Cape Town and Durban -- also boasts a visitors' centre and an adjacent compound for security staff that is normally deserted.

Nkandla "symbolises everything that people have a discomfort with with the current administration", said political analyst Justice Malala.

Like South Africans across the country, Zuma's neighbours are appalled.

"It's disappointing," said pensioner Bhekekile Ndlovu, who lives opposite "the big Zuma home".

The contrast between Zuma's luxury lifestyle and that of his neighbours who live without running water and electricity echoes the disparities that make South Africa one of the most unequal countries on earth.

'Our homes are collapsing on us'

The winding road leading to Nkandla is riddled with potholes, save for the last stretch near the village.

The government has admitted some families who lived near Zuma's home were removed, as they posed a security risk.

"He can see that we are suffering... our homes are collapsing on us. Government did not spare a thought for us," said Ndlovu, who supports her large family with her monthly old-age grant of 1,200 rand ($100).

Some villagers told AFP they voted for the ANC in the 2009 election in support of Zuma, hoping the folksy former cattle herder would have a better understanding of their plight than former president Thabo Mbeki, an intellectual often perceived as aloof.

"I would have liked to see the money used to build the president's home used to benefit the community," said unemployed resident Bonginkosi Khuzwayo.

"We always hear that government has no money, then this happens," he said.

"I'm not sure if he still deserves my vote."

In all probability Zuma will not need it.

Having been instrumental in ending apartheid, the ANC can still count on broad support in the black community.

"Nkandla alone is not enough to drastically sway the views of ANC supporters at grassroots level," said analyst Ralph Mathekga, "even though the party could be better off without it."

But support for the ANC is not endless, and anything short of a another electoral landslide will mean the knives are out for Zuma.

In 2009, the ANC under Zuma swept to victory with 65.9 percent of the vote, but polls today put support for the party at closer to 50 percent.

"The ANC right now is sitting there with its heart beating very, very fast because it's a big issue in this election, this house," said Malala.