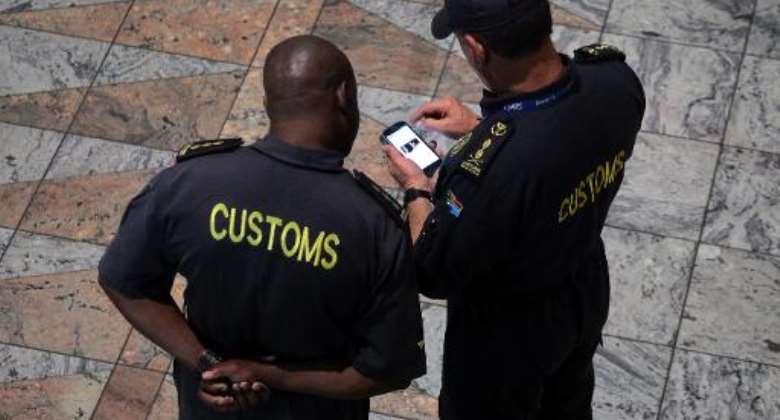 Customs officials work at Tambo International Airport in Johannesburg on May 3, 2013. By Jennifer Bruce (AFP/File)

Johannesburg (AFP) - Several hundred reptiles and amphibians were found dead at Johannesburg airport when a routine inspection uncovered some 1,600 of the creatures crammed into two crates destined for the United States.

The shipment, from Madagascar, was left unattended in the cargo area of OR Tambo International Airport after bad weather delayed flights to the US, South Africa's National Society for the Prevention of Cruelty to Animals (NSPCA) said on Friday.

"The bad smell coming from the sealed animal crates indicated that many of the reptiles were dead or dying and in need of urgent assistance," the NSPCA said in a statement.

The surviving animals, which include geckos, frogs, chameleons, lizards and toads, are being treated at Johannesburg Zoo.

The NSPCA said the animals had been kept in small muslin bags or plastic tubes for about five days before they were found on January 29.

"Many animals could not move or turn around in their containers. None had been provided with water," it said.

The shipment was legal and the animals were destined for the pet trade, according to the NSPCA.

"People who have exotic animals as pets must realise that they are causing this cruelty. Without the demand for these animals as pets, there would be no market and these animals would not be stolen from the wild," said Ainsley Hay, the manager of the NSPCA's Wildlife Protection Unit.