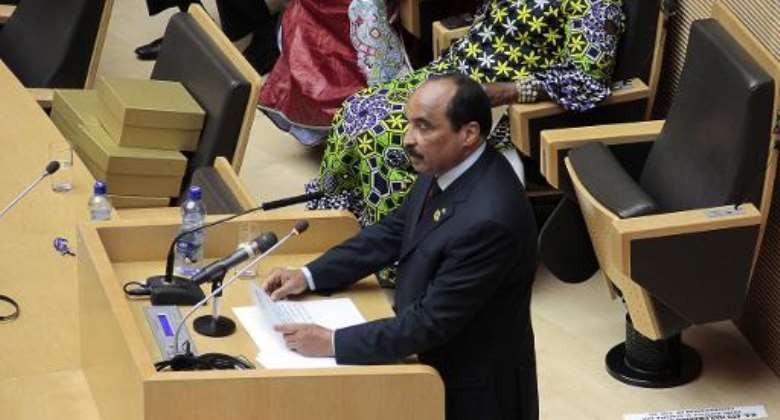 Addis Ababa (Ethiopia) (AFP) - African leaders on Friday toiled over how to stamp out two spiralling conflicts on the continent, warning urgent solutions were needed to prevent South Sudan and the Central African Republic from "falling into the abyss."

The African Union summit wrapped up with calls to boost support for a peacekeeping mission on the ground in Central Africa, and send monitors to oversee a shaky ceasefire in South Sudan.

The meeting was meant to focus on agriculture and food security, however the 54-member bloc yet again spent most of the time bogged down trying to resolve conflict in member states.

Ethiopian Prime Minister Hailemariam Desalegn warned of the need for "urgent solutions" to prevent the two nations "from falling into the abyss."

AU Peace and Security Council chief Smail Chergui said Friday more support was needed for Central Africa, with a donor conference due Saturday following the closure of the official summit.

CAR descended into chaos 10 months ago after rebels overthrew the government, sparking violence between the Christian majority and Muslim minority that has uprooted a million people out of a population of 4.6 million.

The more than 5,000 AU troops deployed alongside 1,600 French soldiers are underfunded and indire need of extra support, the conference heard.

While African troops serve in UN missions across the continent, including South Sudan and CAR, a long-planned African standby peacekeeping force has yet to materialise

UN deputy secretary general Jan Eliasson called for more to be done on the "longstanding" issue.

"A very big problem for the African Union is of course financing their operations," Eliasson said. "I would very much hope that we would see more action taken in the area of standby capacities."

The AU force in Central Africa, known as MISCA, is supposed to reach 6,000 troops but deployment has been slow.

Diplomats suggested that even when the force was at its full strength, it may struggle to secure vast areas outside CAR's capital Bangui, hinting at a need to increase troop numbers in the future.

Despite a new government being put in place, there has been no let up in the horrific interreligious clashes in Bangui and the interior, with at least 30 killed in the capital in the past three days, the Red Cross said Friday.

Chergui said the force had done a "noble job" and despite increasing demands on the AU troops, insisted there were no current plans to transform the force into a UN peacekeeping mission.

The European Union, which as approved a 500-strong force for CAR, pledged 45 million euros ($61 million) on Friday in both military and political funding.

Both UN special envoy Haile Menkerios and US special envoy Donald Booth said it was "critical" monitoring teams be put swiftly in place to report on any violations, including by foreign forces.

Both government and rebels accused each other of violating the deal, but insist they are committed to ending a bloodshed in which thousands have been killed and more than 850,000 forced from their homes.

"The cessation of hostilities is not holding 100 percent, in fact there are several skirmishes, very serious ones in a couple of cases," Eliasson said.

The UN reported recent clashes in the three states of Unity, Upper Nile and Jonglei, with the number of those fleeing violence continuing to grow, the UN said Friday.

"The South Sudan situation is like a wound... where there is a risk of an infection, and if that spreads and this becomes a regional issue, it is getting more dangerous."

Clashes continued Friday, one week since a ceasefire came into force, with aid agency Medecins Sans Frontieres saying its hospital staff in the town of Leer had fled fighting, carrying "dozens" of the most sick patients to hide in the bush.

"The situation became too unstable and the only way to provide medical care was to take patients out of the hospital and to flee with the population into the bush," said MSF head of mission Raphael Gorgeu.