By Felix A. Baidoo / The Mirror / Ghana 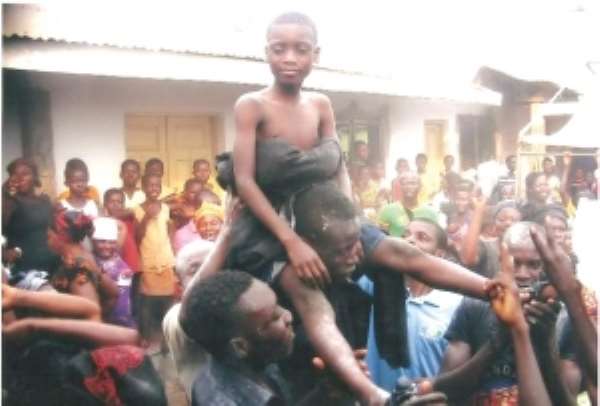 An 11-year-old primary four pupil of Adomanu Roman Catholic Primary School has been installed chief linguist at a well-attended ceremony at Adansi Adomanu in the Adansi-North District of Ashanti.

His stool name is Nana Akyina Kwarteng II.
Known in private life as Yaw Kwarteng by his parents and Christian Adjapong by his schoolmates, the new chief  linguist succeeded  Nana Takyi,  who was installed at  the  age of  14 but passed on a year ago after  serving  for  38 years  as  Adomanuhene's  chief   linguist.

It  was  a memorable occasion at  the  Adomanu  palace  as a large  crowd, made up  of chiefs, old men and women and schoolchildren, witnessed  the  teenager swearing the  oath of  allegiance to the Adomanuhene, Nana  Asirifi Asare II.

Nana Asirifi  Asare  advised  the  new  chief linguist  to take  keen interest in his education,  as  well as  his “ new position  as chief linguist”.

The Adomanuhene stressed that “at  your tender  age,  you should  not  take  pride  in  your  traditional  position  to the  neglect of your academic pursuit”.

Nana Asirifi Asare gave  the fullest  assurance  that Nananom  would  join  hands with  his parents  to sponsor  his education to the height  that he wanted to reach.

He,  however, warned Nana Akyina Kwarteng II  not to be following  any sub chief  to a function of which he  was not aware because “you are my chief linguist  and not to any sub chief”.

Nana Akyina Kwarteng II in a short message thanked the traditional leaders for the honour done him and pledged to serve the chiefs and people with devotion.