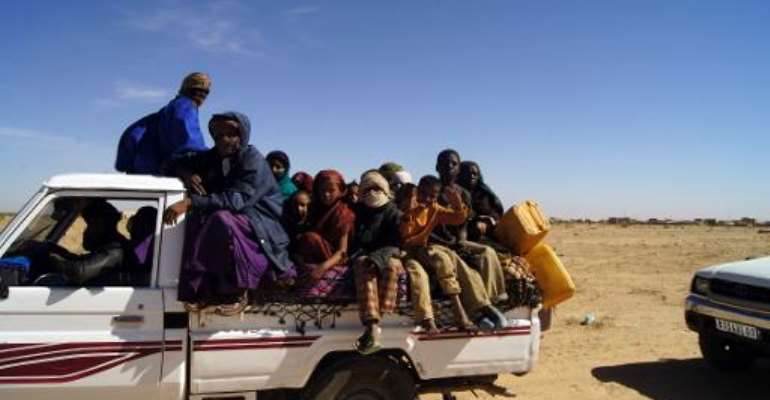 Malian refugees ride in the back of a truck transporting them on a dirt road from Timbuktu to the Mauritanian town of Fassala on January 18, 2013. By - (Al-Akhbar News Agency/AFP/File)

Dakar (AFP) - More than 800,000 Malians are desperate for food while another three million risk going without meals as the country struggles to emerge from months of armed conflict, 11 humanitarian groups warned on Friday.

An Islamist insurgency and the after-effects of a food crisis in 2012 combined with poor recent harvests have severely limited access to basic supplies for the most vulnerable, the organisations including CARE International and Oxfam said in a joint statement.

"The number of vulnerable people facing a new food crisis is likely to double if the needs identified are not met quickly," said Franck Vannetelle, director of Action Against Hunger in Mali.

A World Food Programme report highlighted in July last year that three-quarters of households were food insecure in the regions of Gao, Timbuktu, Kidal and Mopti and the charities say the number has continued to rise in recent months.

The "lean" season -– when food runs low before the next harvest –- is expected to start early this year and the late arrival of rain, scarcity of cereal, poor harvests and failure of markets to function means Malians have not been able to recover since last year's lean season.

"The volatile security situation increases pressure on infrastructure and basic services in more secure areas, and disrupts the economic activities essential for people to recover, making them vulnerable to the slightest shock," said Helene Queau, mission chief for Solidarités International in Mali.

Mali, once seen as rare example of stable democracy in restive west Africa, is in the early stages of recovery after a coup and nine-month Islamist occupation in 2012 which drove more than 200,000 people from their homes.

The Al-Qaeda-linked militants were pushed back by a French-led military operation launched a year ago but continue to carry out sporadic attacks in the northern desert, where security sources say they are regrouping and rearming.

The United Nations emergency appeal for 2013 was only 55 per cent funded and the outlook for 2014 is already proving bleak with a drastic cut in contributions, the organisations said, calling for an urgent response from the international community.

"Food and nutrition support in the north of Mali should be stepped up in anticipation of the early hunger gap in 2014," said Osseni Amadou, emergency coordinator at CARE International Mali.

Mohamed Coulibaly, Oxfam's director in Mali, said placing family farming at the heart of the country's agricultural policies and building up food reserves was vital in the long term.

The UN's humanitarian office in Mali said in a report published on Monday it had collected $264 million (195 million euros) of the $477 million required to alleviate the crisis.