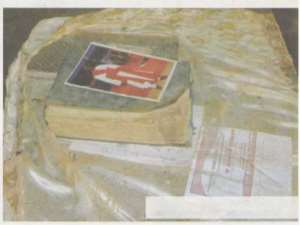 Curious onlookers who thronged Kwahu-Fodoa to witness the massive destruction caused by a gas explosion last Wednesday, January 22, 2014 were struck with awe when a Bible inside a church in the affected area remained intact.

The inferno destroyed most of the items in the Kwahu-Fodoa branch of the New Faith Church International but did not touch the 50-year-old Bible.

The Bible laid on top of a table on the altar of the church after a gas tanker crashed into the church and sparked the fire.

A picture believed to be one of the church's leaders also lying on top of the Bible and a notebook lying beside the Bible were spared.

However, several chairs belonging to the church that were behind the table on the altar were completely burnt together with other items in the church building.

When The Mirror visited the farming community last Friday, three days after the explosion, some of the onlookers described the scene inside the church building as “a wonder”.

“Indeed everything will pass away but not the word of God,” retorted Kwabena Addo, a resident of the area, who looked on dumbfounded at the unburnt Bible.

Several residents who spoke to The Mirror stated that the church building had now become a 'tourist' attraction to most motorists and other people who stopped by to take a look at the extent of damage caused by the fire.

The inferno killed eight people and caused life-threatening injuries to 13 others, most of whom are currently receiving treatment at the Burns Unit of the Komodo Anokye Teaching Hospital in Kumasi.

The blaze also destroyed 37 houses, farms and domestic animals. It has displaced hundreds of the residents, causing them to  seek refuge in nearby Kwahu towns.

The incident followed an accident involving a gas tanker that skidded off the road and crashed into the church building.

The impact of the crash was so severe that one of the compartment of the tanker opened, releasing huge amount of gas into  the atmosphere.

The inferno was sparked two hours later when the gas came into contact with the naked fire that consumed items in the church and a large part of the farming community.