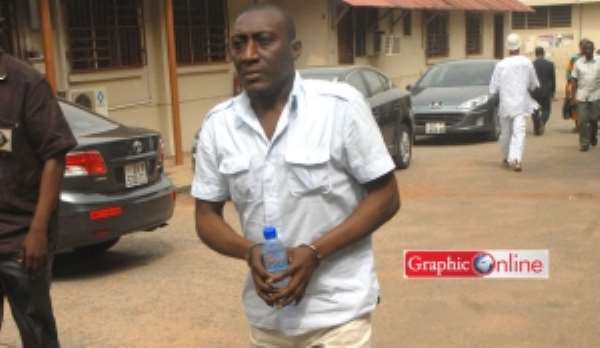 The Accra Fast Track High Court has adjourned to February 5, 2014 the case involving Christian Sheriff Asem Darkei, the man at the centre of the shipment and disappearance of 77 parcels of cocaine.

The adjournment is to enable new lawyers for Darkei to study the court proceedings for him to open his defence.

Darkei, aka the Limping Man, who was to open his defence in December last year, could not do so because his lawyers withdrew their services.

The court, therefore, adjourned the case to January 29, 2014 to allow the accused to employ the services of a lawyer to enable him to open his defence.

Darkei is alleged to have played a major role in the shipment of 2,310 kilogrammes of cocaine, with a face value of $138.6 million, into the country in April 2006.

Arrest
Darkei was arrested by BNI officials at the Korle-Bu Teaching Hospital on February 2, 2012 upon a tip-off, after he had been pursued for years by the security agencies.

He had gone to the hospital to seek medical treatment.

He has, however, pleaded not guilty to three counts of conspiracy, importation and exportation of narcotic drugs.

Facts of the case
It is the case of the prosecution that around midnight on April 26, 2006, a vessel, the MV Benjamin, reportedly carrying about 77 parcels of cocaine, with each parcel weighing 30 kilogrammes, docked at Kpone/Tema and discharged the parcels.

The parcels were offloaded into a waiting vehicle which carried them away.

According to the prosecution, in the course of investigations, Darkei's name featured prominently as the importer and/or owner of the drug.

He was said to be the person who had chartered the vessel at a cost of $150,000 to tow another vessel from Guinea to Ghana and, subsequently, carted the alleged 77 parcels.

Shipowner jailed
The disappearance of the cocaine led to the constitution of the Justice Georgina Wood Committee and the subsequent trial of persons alleged to have played various roles in the importation.

Bruce Arhin, however, died about three weeks after his conviction.

The convicts, including Arhin, were found guilty of using property for narcotic offences, engaging in prohibited business relating to narcotics and possession of narcotic drugs without lawful authority.

A sixth accused person, Pak Bok Sil, a Korean, was, on October 16, 2007, acquitted and discharged by the court which had held, during a ruling on a submission of 'no case', that the prosecution had failed to prove a case against him.