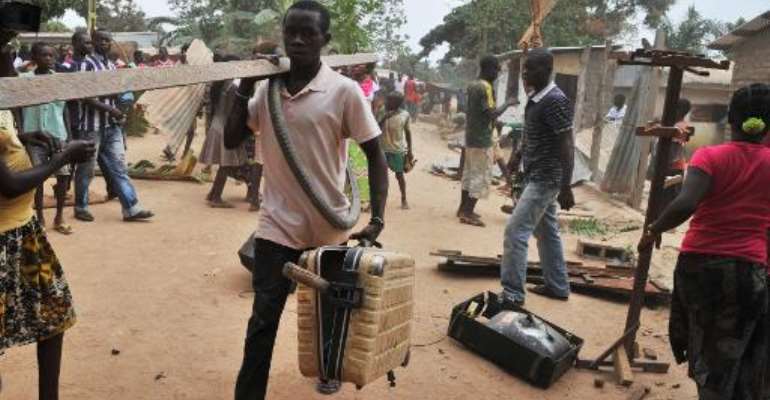 Looters steel objects from the homes of Muslim residents of Bangui, Central African Republic, after the departure of ex-Seleka Muslim rebels from the Kasai military camp to another camp outside the city on January 28, 2014. By Issouf Sanogo (AFP)

Addis Ababa (AFP) - Conflict in Central African Republic and South Sudan dominated the agenda as Africa's leaders gathered Thursday for a two-day summit of the continental bloc in Ethiopia.

But the 54-member bloc will spend much of the time bogged down yet again trying to resolve conflict in member states.

"Our hearts go to the people of the Central African Republic and South Sudan who face devastating conflicts in their countries and especially to women and children who've become the victims," AU chairperson Nkosazana-Dlamini Zuma said in her opening remarks.

"We have to work together to ensure that we build lasting peace," she told the African heads of state gathered in Addis Ababa.

Speaking at a ministerial-level meeting this week, Ethiopian Foreign Minister Tedros Adhanom lamented that "humanitarian tragedies are unfolding in the two countries at a time when we are talking about 'African renaissance'."

The unfolding humanitarian disaster in CAR, where a 5,300-strong AU force is deployed alongside 1,600 French soldiers, will be a key talking point.

CAR descended into chaos 10 months ago after rebels overthrew the government, sparking sectarian violence that has uprooted a million people out of a population of 4.6 million.

On Saturday, after the official summit closes, African leaders and Western diplomats will hold a pledging conference to raise cash for the African Union-led MISCA mission.

"What we hope is strong support for MISCA, to enable it to implement its mandate more effectively," the director of the AU peace and security council, El-Ghassim Wane, told AFP.

The warring parties in neighbouring South Sudan signed a fragile ceasefire last week, but clashes between government and rebels continue, with thousands killed and over 800,000 forced from their homes in bloodshed that has now lasted for six weeks.

AU peace and security commissioner Smail Chergui said the bloc was calling on Juba to release four remaining prisoners -- after seven were set free -- rather than put them on trial for attempting to topple the government.

Chergui said their release is key "so they can participate and contribute to the dialogue that will be initiated between all the parties of South Sudan".

Peace talks led by the regional East African bloc IGAD adjourned after last week's ceasefire deal, with mediators calling for the AU to play a greater role in the peace process.

Heads of state will gather at the gleaming Chinese-built AU headquarters, which comes eight months after the bloc marked its 50th anniversary in May.

The controversial role on the continent of the International Criminal Court (ICC) is also expected to be addressed.

Phil Clark, politics lecturer at London's SOAS University, said the AU faces criticism in its response to crises, especially in South Sudan and CAR, noting the "concern... the AU isn't showing sufficient leadership in resolving these types of conflicts."

Leaders are also expected to focus on "Agenda 2063", a 50-year roadmap for the AU that has been a major pre-occupation for Dlamini-Zuma.

The one-year rotating chair of the AU, currently led by Ethiopia, will also be replaced.

Mauritania's Mohamed Ould Abdel Aziz, who became the north African country's president in 2009 after leading two coups in four years, is tipped to take the post.