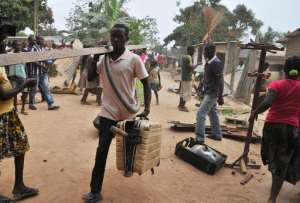 Addis Ababa (AFP) - Conflict in Central African Republic and South Sudan dominated the agenda as Africa's leaders gathered Thursday for a two-day summit of the continental bloc in Ethiopia.

Talks, due to be opened by African Union chairman and Ethiopian Prime Minister Hailemariam Desalegn mid morning Thursday, have an official theme: agriculture and food security.

But the 54-member bloc will be bogged down yet again trying to resolve conflict in member states.

"The fact that these humanitarian tragedies are unfolding in the two countries at a time when we are talking about 'African renaissance' must be painful to all of us," Ethiopian Foreign Minister Tedros Adhanom said, speaking at a ministerial-level meeting on Monday.

"Unless we find (an) urgent solution, the situation in these two countries will have serious implications for peace and security in the region, and indeed the whole continent," he added.

The unfolding humanitarian disaster in CAR, where a 5,300-strong AU force is deployed alongside 1,600 French soldiers, will be a key talking point.

CAR descended into chaos ten months ago after rebels overthrew the government, sparking sectarian violence that has uprooted a million people out of a population of 4.6 million.

On Saturday, after the official summit closes, African leaders and Western diplomats will hold a pledging conference to raise cash for the African Union-led MISCA mission.

"What we hope is strong support for MISCA, to enable it to implement its mandate more effectively," the director of the AU peace and security council, El-Ghassim Wane, told AFP.

The warring parties in neighbouring South Sudan signed a fragile ceasefire last week, but clashes between government and rebels continue, with thousands killed and over 800,000 forced from their homes in bloodshed that has now lasted for six weeks.

Peace talks led by the regional East African bloc IGAD adjourned after last week's ceasefire deal, with mediators calling for the AU to play a greater role in the peace process.

Heads of state will gather at the gleaming Chinese-built AU headquarters, which comes eight months after the bloc marked its 50th anniversary in May.

The controversial role on the continent of the International Criminal Court (ICC) is also expected to be addressed.

Peter J. Pham, director of the Africa Centre at the Atlantic Council, said the AU's slow response to the crisis in CAR points to a deeper institutional weakness when it comes to rapidly evolving conflicts.

He was especially critical of AU plans for an on-call peacekeeping force.

"For all the talk -- we've had it for well over a decade -- about an African standby force, the fact is that when emergencies come up, it starts all over again," he said.

"There's a lot of concern at the moment that the AU isn't showing sufficient leadership in resolving these types of conflicts," he said.

Leaders are also expected to focus on "Agenda 2063", a 50-year roadmap for the AU that has been a major pre-occupation for the head of the its executive council, Nkosazana Dlamini-Zuma.

The one-year rotating chair of the AU, currently led by Ethiopia, will also be replaced.

Mauritania's Mohamed Ould Abdel Aziz, who became the north African country's president in 2009 after leading two coups in four years, is tipped to take the post.

"It's a great time to invest in Ghana, the safest country in...
58 minutes ago