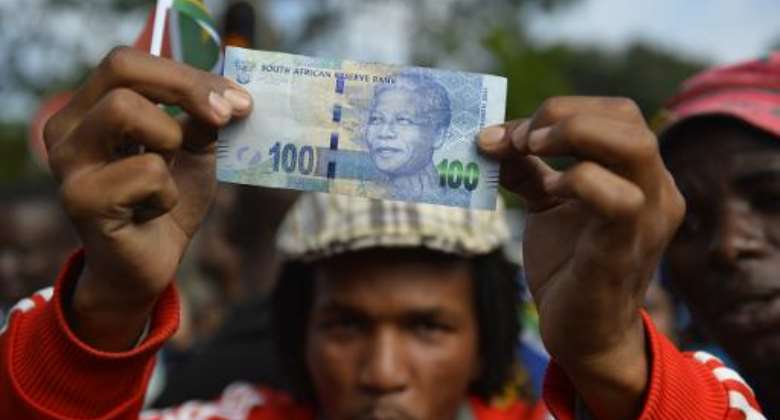 A man holds a 100 rand bill bearing the portrait of South African former president Nelson MandelaMandela as Mandela's funeral cortege drives through the streets in Pretoria on December 11, 2013. By Odd Andersen (AFP/File)

At a scheduled policy meeting the bank raised the main rate by half a percentage point, to 5.5 percent, the highest level since July 2012.

It was widely expected that rates would be left at multi-decade lows amid weak growth and high unemployment.

Instead the reserve bank -- with some internal dissent -- followed other emerging countries in trying to stem the fallout from tighter US monetary policy, which has sent investors rushing to less risky assets.

Hours earlier Turkey's central bank doubled interest rates in the face of its own currency crisis.

But like the lira, the rand -- which is trading at its weakest levels in five years -- appears to have been given little respite from the bank's decision.

The rand hit a new five year low of 11.3803 to the dollar shortly after the announcement, although recovered slightly in later trade.

"But they went in half-hearted and the market seems to have called their bluff."

The trigger for bank's move appears to have been the prospect of rising inflation -- which has been fuelled by more expensive imports thanks to the weak rand.

"The primary responsibility of the Bank is to keep inflation under control," Governor Gill Marcus said.

Consumer prices are forecast to increase at an average of 6.3 percent this year, Marcus said, well above the bank's upper target range.

But Marcus also cited a litany of "policy challenges and very difficult trade-offs" that South Africa and its peers have faced since the US Federal Reserve signalled it would reduce monetary stimulus.

But Marcus also admitted that events inside South Africa had taken their toll.

With elections expected within months political tensions are high, with at least eight protestors killed by police this year and renewed labour unrest in the mining sector.

Around 80,000 platinum workers are currently on strike over wages.

Peter Montalto, emerging markets economist at Nomura, said amid the political heat the bank has showed its focus is solely on addressing inflation.

"It's a statement that they are not political. A lot of people in the market thought they couldn't hike rates before the election," said Montalto, speaking from London.