Lawyer demands 'truth' on Salafist deaths at US embassy in Tunis 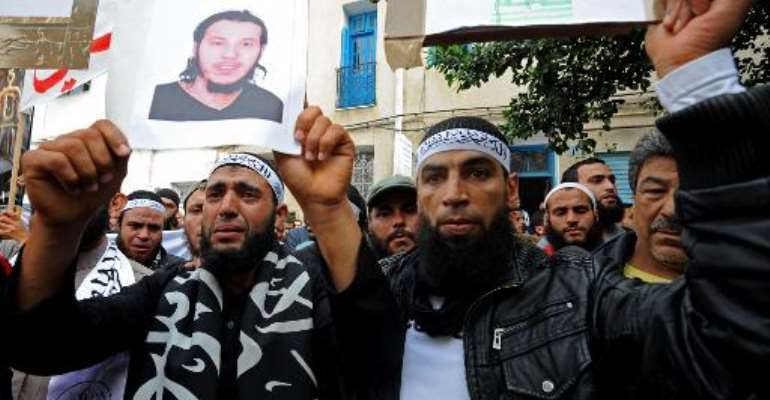 Tunisian Salafists rally in front of a court house in Tunis on November 6, 2012, to demand the release of people arrested in connection with the attack on the US embassy. By Fethi Belaid (AFP/File)

Tunis (AFP) - The lawyer representing 20 Salafists given suspended sentences over an attack on the US embassy in Tunis demanded the "truth" Tuesday about the killing of four assailants, hinting that embassy staff were responsible.

Defence lawyer Monaem Turki branded as "political" the appeals trial of the 20 suspects, which comes after Washington sharply criticised the original sentences for being far too lenient.

The judge, after a brief hearing on Tuesday, adjourned the case until March 25.

Only three of the accused were present in court, an AFP journalist reported, with Turki saying the majority had not been summoned to the trial.

"The affair has become political, because the United States has put pressure on the (Tunisian) government" since the first ruling, he told AFP after Tuesday's hearing.

"We are calling for the truth about those who killed the four protesters on September 14 (2012). We don't know if it was the Tunisian police or the embassy security," he added.

Hundreds of angry Islamist protesters attacked the US mission in Tunis after an American-made film mocking their religion was published on the Internet, unleashing a wave of violence across the Muslim world.

Four of the assailants were killed and dozens wounded in the violence, with an inquiry holding Tunisian police responsible and stating that the embassy's security personnel did not intervene to protect the mission, which was badly damaged.

The public prosecutor decided last May to appeal the two-year suspended jail terms given to the 20 suspects for their roles in the attack, after Washington said it was "deeply troubled" by the leniency of the sentences, which were also criticised by the Tunisia government.

Around 80 suspects are still awaiting trial for their alleged participation.

Tunisia's Islamist-led government accused the radical Salafist group Ansar al-Sharia, led by a former Al-Qaeda fighter in Afghanistan known as Abu Iyadh, of orchestrating the attack, but none of the suspected organisers of the attack have been arrested.

Earlier this month, Washington added Tunisia's branch of Ansar al-Sharia and its fugitive leader, whose real name is Seifallah Ben Hassine, to the US terror blacklist, along with affiliated organisations in Libya.

Since the 2011 revolution that overthrew the regime of Zine El Abidine Ben Ali, Tunisia has been rocked by waves of violence blamed on hardline Islamists, who were suppressed by the former dictator.