Kotoka Passenger throughput on the rise 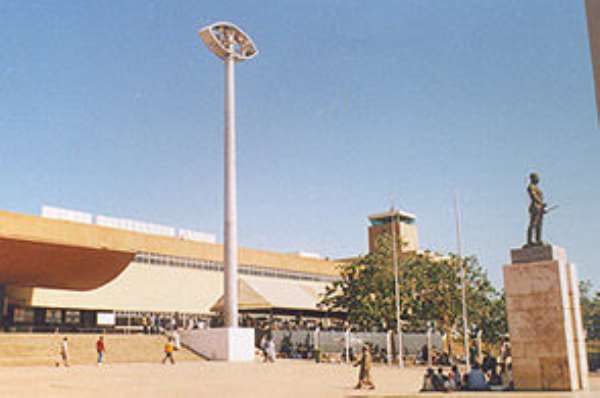 Accra, March 21, GNA - The total number of passengers through the Kotoka International Airport (KIA) has increased consistently over the years, rising from 622,525 in 2001 to 685,362 at the close of 2003. This confirms the fact that KIA has improved as an attraction and a preferred transit and final destination points due to the increasing status of Ghana as a safe haven and heightening tourism potential. The number, which includes passengers on non-scheduled airlines, had earlier risen to 636,114 in 2002, according to documents made available to the Ghana News Agency (GNA) Business Desk in Accra on Wednesday by the Ghana Civil Aviation Authority (GCAA).

The document, which sought to show the number of passengers coming into and those leaving the country, had shown a considerable rise over the last couple of years.

In the broader market, Ghana Airways carried most passengers in and outside the country posting 265,337 passengers in 2001. The total number of passengers on the national carrier dropped to 222,045 in 2002 dipping further last year to 213,661 amidst bankruptcy calls on the airline.

The document indicated that Ghana Airways, however, was still leading in the total market share with 31.2 per cent of passengers coming and leaving the country between 2001 and 2003 while KLM Royal Dutch Airlines was second carrying 124,041 passengers in 2001 and 129,854 in 2002.

British Airways, however, has 15.3 per cent of the total market share in the Ghanaian aviation industry.

Another African giant, Ethiopian Airlines had 30,542 passengers in 2001. This however, dropped sharply to 20,161 in 2002 to what industry analysts and aviation experts contend as the result of the September 11 crisis.

On aircraft movements, the GCAA named Ghana Airways, despite its problems, as the airline which had most flights: a total of 9,332 flights from 2001 to 2003.

British Airways made 1,316 flights over the same period while South Africa Airways also made a total of 1,424 flights and Kenya Airways 663 flights.

Lufthansa movements in and out of Ghana posted 1,131 flights and Alitalia 1,065 flights.

Flights within the continent were not as frequent emphasizing the fact that African are not in the habit of travelling between their own to know about and do business.

Industry analysts attributed the situation to debilitating problems affecting the airline, which has led to it to be grounded for the injection of a new lease of life with Nigeria Airways making two flights in 2001, none in 2002 and 2003.

Air Ivoire did not fly into the country in 2001. However, it made 122 flights in 2002 rising to 410 last year. Air Guinea made only two flights over the period.

Total freight carried by both scheduled and non-scheduled flights was 133,339,065 kilograms.

I dozed off only to realize JB Danquah Adu has been killed –...
11 minutes ago