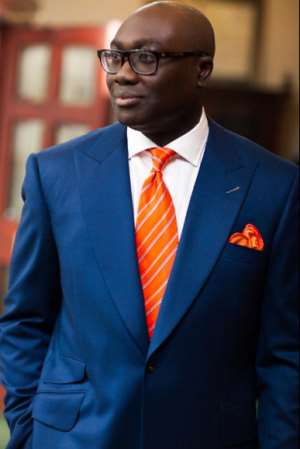 • God has been very good to me.
• Last year I experienced a lot of illness.
• My BP nearly gave me a stroke but I trod on.
• Waking up at 2am and heading to work. Exhausted sometimes…aching in my body and soul…

• Mentally and emotionally drained, but I kept going.

• I smiled for the camera...
• I volunteered for extra shifts...
• I showed respect to my colleagues from directors to security guards…

• I took a lot of jealousy driven vicious insults and

• Backstabbing from petty people without reply…
• I remain silent in my personal strife and misery...

• I kept smiling and pushing on to present better and

• To engage with my audience and increase my following…

• Long days and frustrating times but I kept going...

• Through the west gate mall coverage through the Mandela funeral...

• Even when illness had me collapsing, I delivered…

• Today my boss, the head of Television called me for a one minute meeting…he said komla we have decided to make you the anchor presenter for our coverage of the world cup in Brazil…we shook hands and I left.

• The enemy will be scattered. Selah! Selah! Praise Him...tomorrow is another day.

Above is a note, purported to have been written by the late Komla Dumor, to a friend, in which he talked about the level of stress his work schedule was putting on him, and also, the excessive racists slur he suffered at the hands of his co-workers at BBC.

Now, I lived and worked in Britain, Milton Keynes, Buckinghamshire, for many years, in the mid-90s, and I never got used to the British system, even-though a had a good job with equally good salary. This is because, no matter how hard i tried to be conscientious in my approach to things at the place of work and discharged my duties with religious diligence, I never was in the good books of my white British bosses.

And while I kept over-working myself to be accepted, my white British co-workers lazied about but they never received any reprimand from the supervisors. This always made me mad and as you probably must have realized about my no-nonsense nature, I was always picking up heated quarrels with both my extremely biased supervisors and damn lazy co-workers.

And what made the matters worse was the fact that, most of my British co-workers could hardly write their very own names, let alone expressed themselves in their own mother-tongue of English. They were virtually illiterates but could master the audacity to laugh when they saw me reading a newspaper because they thought I had no capacity to read and understand what was written in there.

So, for example, whenever we were having a tea break and they engaged me in a conversation, I would intentionally use gargantuan grammar and they will turn round and say "but how can you come here from Africa and speak our language (English) so well?'.Effectively, they simply couldn't even come to terms with the simple fact that I was a highly educated fella.

I used to do a two-week shift at my place of work where i had to wake up at dawn for 2-weeks and then change to afternoon shift. That kind of work schedule had a great toll on me by way of always disturbing my sleep pattern and i way often not in good mood.

Again, there is this enticing scheme in Britain where workers are virtually pressured to work themselves to death; and what they do is, if let's say, you are paid $20/per hr on a normal day of work, you are given $40/per hr on public holidays, which makes it damn appetizing and much difficult to reject.

So in the end, those of us that have traveled in-search of a better life are always caught in this enticing web and we end up working our dam ass off, throughout the year!!! In addition to this, was the issue about the chronically unwelcome British weather, coupled with equally unwelcoming and highly self-centered British people.

So, i woke up one day and simply decided to return home and continue with life, irrespective of the cost since no matter how I tried still couldn't get used to the British way of life. And when I told my friends who had been there for over 20years before I went, they were surprised because here we were; no light-offs, water crisis, accommodation problems, food was cheap etc. Infact, they thought there was something wrong with me.

In the end, I packed bag and baggage, headed back home and i wouldn't say I'm rich now, but, I can say with all confidence and with much reverence to the almighty God that I'm relatively comfortable. As a matter of fact, I had the opportunity to travel to America, last year, with a working visa, but I never bothered to embark on that trip.

Now, I have decided to give this personal account of an experience I had to go through during my days in Britain, and the nauseating level of racist slur I had to contend with to let our youth who are under the illusion that, unless they secure visas and get out of our shores, life cannot be worth-living. Our thieving leaders must also stop the naked rapping of state coffers and come up with innovative policy alternatives to lessen the socio-economic woes of ordinary citizens.

So, after reading that personal account of what Komla had to go through at BBC by way of racist slurs and highly physical/mental-draining work-schedule, i think, in my humble opinion, he should have either quit the job, or, been a little bit assertive when it became clear to him that those excessively demanding working hours being piled on him, was adversely having a toll on his health.

I'm really angered by the death of Komla Dumor because he was an exceptional human-being who could have even become the president of Ghana in future. This was a young-man who was offered a ministerial position by John Agyekum Kufuor but respectfully turned down the offer on the grounds that he didn't think he was that matured enough for the job of a minister of state, a level of humility that is in sharp contrast to what we have today with all these babies with metallic teeth and crooked acidic tongues!!!

Indeed, the loss of Komla is such a great tragedy which I believe his family, particularly the wife and young kids, and our nation as a whole, will find extremely difficult to deal with for a long long time.

Fare thee well, Komla; you are indeed a great son of mother Ghana who lived life to the fullest, and may the almighty god keep you safe in his bosom till we all meet again some-day.