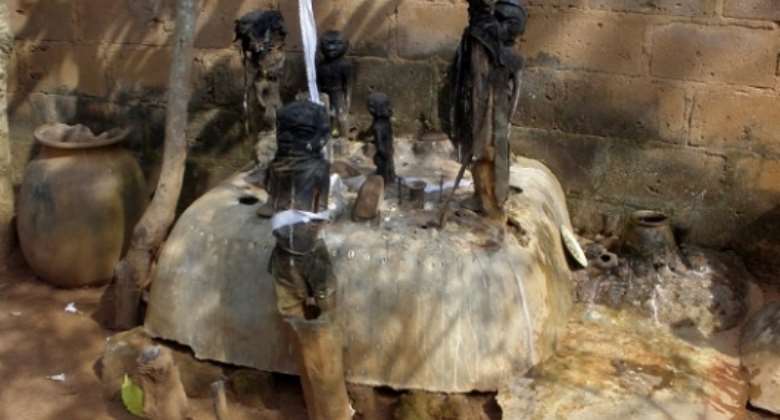 The town of Fasen in the Ahanta West District of the Western Region, was on Thursday thrown into a state of pandemonium when the ghost of a 39-year old man allegedly arrested a fetish priest.

The ghost of Kweku Musu purportedly manifested itself in a woman, Maame Abome, and arrested Nana Tandoh, the fetish priest, who supposedly shot him spiritually.

The Chief of Fasen, Nana Obomu Nketsia, III, confirmed the incident to the Ghana News Agency.

He said Oldman Armoo's mobile phone got lost about three months ago and upon several announcements he did not find it, therefore, he reported the theft to a powerful fetish priest, Nana Tandah at Kwamekrom, to deal drastically with the thief.

Interestingly, the chief said, Armoo bought the phone from the fetish priest therefore Nana Tandoh performed all the necessary rituals at his shrine and then preceded to Fasen, where the phone was stolen, and shot a gun three times in the air.

The chief said the one who stole the phone then left the phone at the door mat of the owner, Armoo, in the evening.

The next day, Armoo went to Kwamekrom and informed the fetish priest about the return of the phone and asked Nana Tandoh to reverse the ritual but he told him it was too late and warned Armoo not to touch the phone.

Unfortunately, the chief said, Kweku Musu, died mysteriously last Monday January 13, and when the family of the deceased inquired about the death of their relative from a shrine, it was revealed that Nana Tandoh killed him.

Therefore, the family of the deceased returned to Fasen to bury Kweku Musu on Thursday January 16, however, the ghost of the deceased manifested itself in a woman and went to Kwamekrom and arrested the fetish priest from his shrine.

The chief said the ghost dragged the fetish priest, including the gun and a pot to the funeral ground thereby creating pandemonium at the town.

Nana Nketsia said the residents of the town then brought the fetish priest to the palace where he confessed shooting Kweku Musu with a spiritual gun.

The chief said it took his personal intervention to prevent the fetish priest from being lynched by the angry mob.

Nana Obomo said he had asked the family of the deceased to report the case to the police.

He said currently, the fetish priest had returned to his shrine at Kwamekrom, however, the gun, bullets and a clay pot had been seized and kept at the chief's palace at Fasen.

Akufo-Addo going to IMF is not victory, it's a day of sadnes...
13 minutes ago