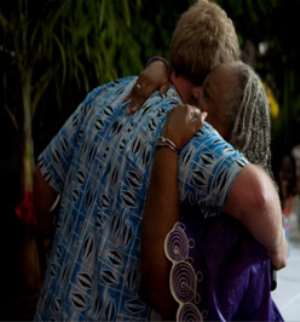 The Africa University College of Communication [AUCC] on Tuesday organized a send-off party for their visiting students from the Ohio University who were in the country on an exchange program.

and assistance accorded them throughout their three weeks stay in Ghana, which in addition took them to Cape Coast and Ada in the Central and Greater Accra Regions.

Master Joe Jackson , a journalism student at the University, described their visit to learn about the culture of Ghana and Africa in general as very fruitful which has not only increased their positive impression on the continent but has helped erased their misconception about Ghana and Africa.

He promised that they will share their experiences and knowledge acquired with their fellow Americans, friends, families and other colleagues back in their country.

They thanked Hon. Kojo Yankah for his visit to their school in March last year which inspired the students to embark on the exchange program. He said Mr. Yankah's lectures in the school motivated a larger number of their students to apply to be part of the program.

In his response, Hon. Kojo Yankah, the AUCC Founder, on behalf of the AUCC thanked the students for making the trip to Ghana which has increased and enhanced their horizons on the Ghanaian and African cultures respectively.

"Let's keep on communicating and maintain the relationship for mutual benefits of the two schools and countries" he said.

He tasked them to maintain the relationship they have created with their Ghanaian counterparts in order to ensure continuous tapping of expertise and sharing of knowledge, ideas and expertise among others through the virtue of the new media.

The AUCC Founder further disclosed that as part of the collaboration between the two universities, a conference on new media will be organized in Accra between October or November this year which will bring together professors and media experts from around the world to brainstorm on current trends and the way forward in modern media.

Beyond the conference, Mr. Yankah indicated that they have discussed other programs as part of their collaboration to enhance learning and acquisition of knowledge.

He wished them traveling mercies and promised them that the AUCC will reciprocate the gesture and embark on similar exchange programs to the Ohio University in the future.

The Acting President of the AUCC, Prof. Kwaku Armah , gave the impression that exchange programs are very essential as it affords participants the opportunity to learn new things which are unknown to them, appreciate the culture of another country.

He is of the view that the visit by the American students will afford them the opportunity to learn more about our cultures and traditions as they have little knowledge about Africa which sometimes gives those negative misconceptions.

He described the current standards of education in Ghana as encouraging but bemoans the level at which people access it especially at the tertiary and second cycle levels.

Accessibility of education at the tertiary level is very challenging which calls for more efforts and collaboration from stakeholders to ensure easy and flexible accessibility for all those who are qualified to enter into the tertiary learning institutions.

The visiting students, who depart Accra on Wednesday 8th January 2014, presented some gifts to certain individuals and institutions including the AUCC and Radio Ada, a local radio station at Ada in the Greater Accra Region.