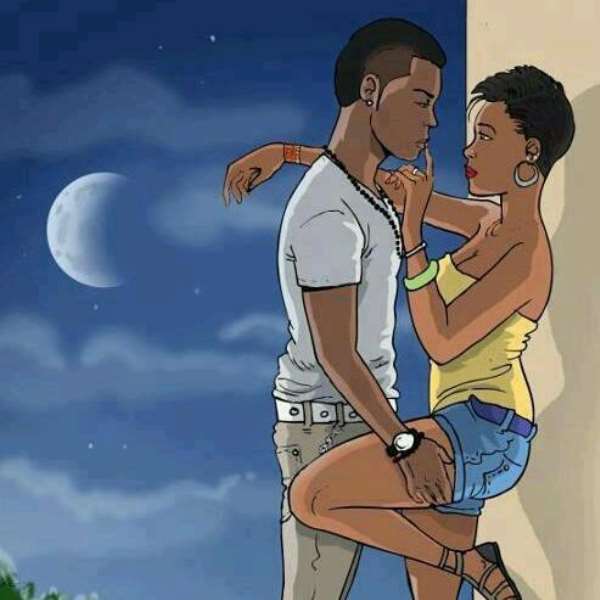 I mustered dirty courage and phoned Master K with a handsome truth. 'Ah, Champion, where are you? Should I not sleep because of you?', he did not even allow me greet him with a hello. 'Masa, I beg, I had a flat tyre and a clutch failure, I am still at Ashaiman, I just need some little time and i will be there'.

With this political lie, not even Mr. Hot Kitchen Nunoo Mensah can fail to grant one's heart desire. 'Champion, just find a safe place and sleep, take care of my Corolla, have you heard!' he concluded. My heart sunk down to my stomach before I finally breathed with a 'yes sah'.

Elsewhere around Power House Junction in Ashaiman, Mama Zee asked me to slow down, we were almost there. Power House is a hideout for the affluent in society.

Huge crescendos fertilized the teaming ghettoes to create a true depiction of Karl Marx's class struggle. I knew every nook and cranny in Ashaiman, in fact, I grew up here. Every Atinga, Atongo and Atanga will still recognize me if they see me, including Mma Adiza, the famous waakye seller.

Only some few years ago, Ashaiman was almost like a rural area with bushes marrying with the Fulani cattle. Indeed, it was here I first tasted raw milk from the udder of a cow.

Mama Zee pointed to an imposing building coated with terrazzo. That is the house. What an architectural lunacy! My concentration had vanished from my childhood days in Ashaiman. A mansion belonging to a minister or an MP, I guessed. For a moment I tried so hard to juxtapose this five star haven with these party freaks half dead in my cab. Different questions trooped my mind, I could qualify to work for WAEC or perhaps help researchers with questionnaire.

Mama Zee made a quick call and there appeared a feme fatale with white ear piece running from her little ears down to her back pocket. She appeared to me as Joselyn Dumas, but a closer glimpse betrayed my eyes. She regaled in the tunes of Joey B and Sarkodie's TONGA, I could hear the tired earpiece from afar. Apparently, she just came to open the blue gate to allow me pour the freaks out, but she did it style. This gate opener, I later gathered her name as Caro almost exposed me to whole world. I fell for her figure instantaneously. I have strong weakness for ladies in African prints, no matter her age, height and size. Caro nailed a mouth-watering woodin top with a condom-like jeanna hanging around her spotless thighs. She finally opened the mouth of the gate after the long cantata.

I had just ended another fruitless effort to reach wifey, when Mama Zee came out. 'My madam wants to see the generous taxi driver who brought us home'. Your madam? She wants to see me? The last time a passenger's mother asked to see me was not a good news, we almost ended up like Vickyleaks and her cousin afterwards.

The door opened, and comfortably seated was the madam. She was sandwiched by sophisticated ladies--close to six of them. She appeared to be rich and comfortable. The living room qualified her demeanor- exotic luxury. 'My son', she cleared her throat before continuing, it is very late, Ashaiman is not that safe at this time of the night. I want you to spend the night here, anything can happen'. I struggled to put words together to turn down her request but this woman wouldn't take NO for an answer. Errm mum, please I have to ….. 'my son', she interjected, 'I have been robbed many times, and I can prophesy what will happen to you if you step your foot outside this house'. A wind of awe and fear engulfed me as I stammered.

This menopause-infested old rich witch was bent on making me pass the night under her roof and nothing, not even a chapter of the sweet words I give wifey could change her mind. Like the proverbial he-goat whose cry and leg-draggings couldn't stop it from been pulled to the market, I finally pushed 'ok, mum' from my front teeth to accept the offer.

Mama Zee showed me to the guest room and I wasted no time in the living room. I was greeted by an Iranian perfumed bed with two pillows to make sleeping a pleasant pilgrimage. Having wiped away the day's sweat in a cool shower, I returned to my phone to inform wifey on current happenings. The network failed again. The time hit 11: 45pm, and thoughts of her left me hanging.

I love my wife to the bone, and making her feel cheated was last thing I wanted her to imagine. It was only nine moons ago when I asked my uncle to help me seek her hand in marriage. Our marriage was exceptional, in fact, the best marriage ceremony of the year. We did it in a traditional style with all attendants downing African fabrics. Traditional drumming, dance and food characterized the caboodle. Memories of the night after our marriage will forever remain in my coconut head like a tattoo on skin. Nzulezu was the destination. If only the chairs and the bamboo house could vomits happenings, then the world would just turn blank; mother earth would just faint and die. What happens in Nzulezu remains in Nzulezu, they say.

A soft knock on my door woke me from my gaily coloured dreams, 'yes, please in'. The mimosa door was pushed open and there stood Caro with food on the right hand, and a white candle on the other hand. She placed the overly decorated food on table and sat by me on the bed. It was boiled yam and Kontomire with different size of fishes swimming in the bowl. I took two bites of the pona yam before I realized the charming presence of Caro with the candle resting between her two innocent fingers. 'Come join me' I squeezed my throat to speak, no please, am ok, she responded with a pretentious innocent voice. What is it with the candle you have in your hand? I probed, 'errm, it is for us'. I quit the food with a sharp look to her face, for us? what for? She kept mute for a minute before she broke my back with an unbelievable story.

Apparently, all the ladies in the mansion worked as prostitutes, including Mama Zee. The mansion was a brothel where big men met their conjugal collaborators. She had been sent by Mama Gee to pay the taxi bill in kind. The candle in her hand referees the quixotic game; when it burns to its feet, it is game over.

My mouth opened with disbelieve automatically turning my taste buds sour. I pushed the food back to quiz her further. You mean, you are all sex workers? Errm yea, I dropped out of school to do this, in fact most of use are high school leavers. She kept talking but I went dead deaf. I could still not come to terms with the revelations according to Caro. All these words jumped out of her mouth without traces of emotions, she was a stoic.

My body sat on the bed, but my mind and soul were indisposed for a while. It was a period of quietude, that moment when an individual encounters dejavu.

Before I could utter another word, Caro pulled down the right string of her bra. 'Should I light the candle now?' She pulled her pink bra from the back with anger and jump to the sofa. Are you still shocked that you have me tonight, like seriously? Are we riding or not? She asked with anger in her voice. Before I could think of the next line of action, a text message flew into my China phone, it was from wifey and it read; “honey, it's unfortunate am unable to reach you. It's late and am wondering where you could be by now, hope you are safe. I know I can always trust you. Luv u”