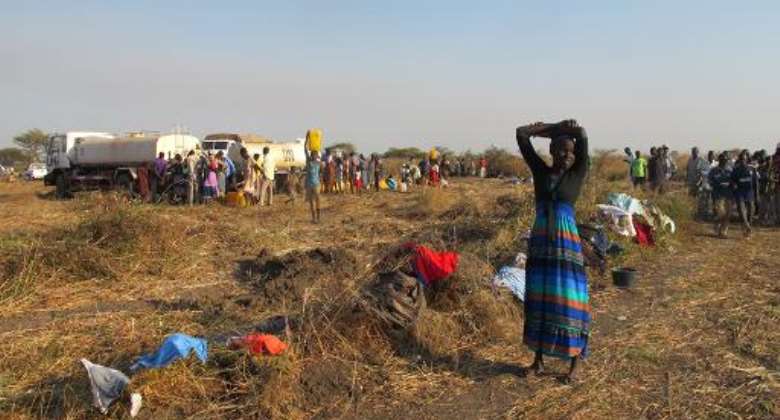 In this photo released by the United Nations Mission in South Sudan (UNMISS) on December 25, 2013 people fill jerrycans with water from UN trucks in Bentiu on December 24, 2013. By Anna Adhikari (UNMISS/AFP)

Khartoum (AFP) - Hundreds of South Sudanese have fled across the border into neighbouring Sudan, a source at the UN refugee agency said Saturday, after fierce fighting in the world's newest state.

"According to information received by the UNHCR that has not been confirmed, hundreds of citizens of South Sudan have crossed the border into Sudanese territory from several border areas," the source told AFP on condition of anonymity.

The source at the UN High Commissioner for Refugees in Khartoum did not have an exact figure for the number of refugees, but said the agency was investigating the reports.

The official SUNA news agency cited the governor of White Nile state, which neighbours South Sudan, Yusuf al-Shambali, as saying on Thursday that thousands of South Sudanese were heading for the border.

The fighting erupted on December 15 after Riek Machar, who was sacked as vice president in July, was accused of attempting a coup against President Salva Kiir.

The United Nations says thousands of people have been killed and more than 120,000 forced to flee their homes, including 63,000 sheltering in UN peacekeeping bases.

Clashes have been reported in half of South Sudan's 10 states, with the violence taking on an ethnic dimension and both sides reportedly committing atrocities.

Sudan's Information Minister Ahmed Bilal Osman has said that he feared an influx of refugees and guns from the unrest in South Sudan, which became independent less than three years ago under a 2005 peace deal that ended 23 years of civil war.