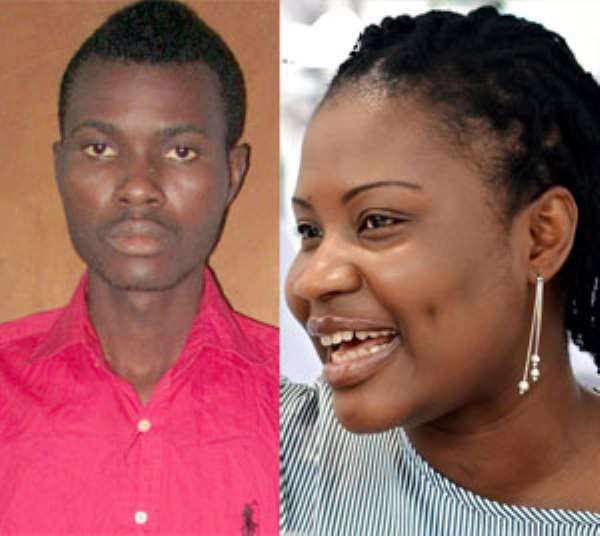 Abraham Kwame Oyotey and Rosemond Nyampong
ABRAHAM KWAME Oyotey Baah, the man who is facing trial for allegedly killing a 32-year-old Stanbic Bank staff, Rosemond Nyampong at Baatsona on the Spintex Road in Accra, will this morning be appearing before a Tema District Court.

The suspect, a self-styled auto-electrician in whose custody the police found the deceased's properties, has been charged for the murder of the Credit Department staff at the bank's head office in Accra.

During his initial appearance before the court, his plea was not taken, but he was remanded into police custody to reappear today to allow further investigations into the alleged murder case.

The suspect revealed that he was contracted by a woman to kill Rosemond for GH¢10,000 but he had since failed to name or disclose the identity of the so-called contractor.

The suspect also mentioned two other persons as his accomplices, but had so far failed to lead police to effect their arrest.

When he was asked to lead the police to their houses, he took them to Achimota and pointed to a big tree where he claimed they reportedly met and hatched the deadly plot.

Abraham Oyotey was reported to have admitted giving information that led to the murder of Rosemond during interrogation and in his caution statement, insisting not to have personally killed the young lady whose autopsy revealed she was strangled to death.

Rosemond, the first of five children, was buried Saturday December 14 at the Osu Cemetery in Accra alongside her father who was buried barely six months ago. Her funeral attracted a large crowd including sympathizers, loved ones, relations, colleagues and friends.

She was found dead, with the body in a decomposed state, as she lay in a pool of blood in her kitchen with her mouth gagged with a piece of black cloth.

Items such as a home theatre system, laptop, mobile phones, a plasma television set and other valuable items belonging to the deceased were found in the room of the suspect whose father's house is close by the deceased's residence.

Following the murder, police intelligence led to the retrieval of the deceased's Toyota Yaris saloon car with registration number GT 5133-10 at Odumase Krobo in the Lower Manya District of the Eastern Region. It was found at a washing bay where Abraham had taken it for washing.

Police was said to have mounted surveillance and when Abraham appeared at the washing bay to drive away the car, he was immediately arrested and brought to the Sakumono District Police Station.

Abraham was said to have removed the vehicle's number plates and stickers, and kept them in the letter box together with the deceased's company ID card.

Efforts by her colleagues at the head office of the bank and some relations led to the discovery of the body on November 21, 2013 at about 5:30pm in her kitchen. By then the body was already decomposing with blood oozing from the nostrils and mouth.

It would be recalled that Rosemond Nyampong was found dead in an ash-coloured suit, deepening suspicion that she was dressed up for work when she was callously killed.

Information gathered was that the assailants used a ladder to climb into the house, pounced on her and stole her vehicle and other items.