THE PRESIDENT IS PURPOSEFULLY FAILING AND MUST STEP DOWN

By The COALITION OF YOUNG LIBERALS (COYLIB) 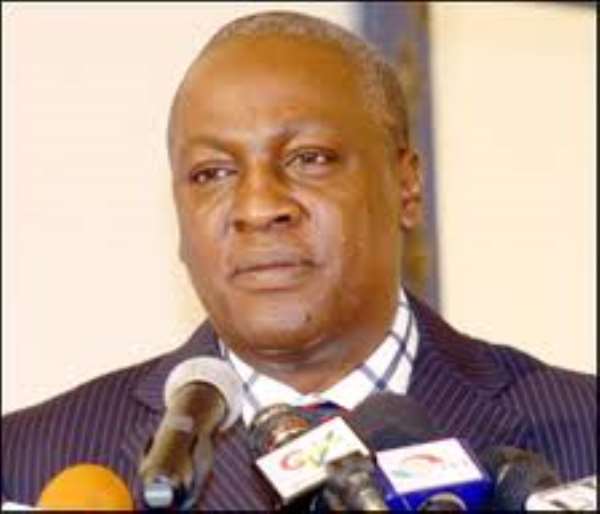 The COALITION OF YOUNG LIBERALS (COYLIB) are worried with the Leadership style of H.E John Mahama and the growing concerned of the state of the nation. We were of the firm believe that President's experiences under the former and late President John Mills will have guided him in solving some of the numerous problems confronting the nation. The experiences spans across leaders including H.E Amissah Arthur (Vice President) as a former Governor of the Bank of Ghana (BOG), and Seth Emmanuel Terkper (Finance Minister) who has an overview of the true state of the economy as a former Deputy Minister in the same finance ministry. These top notch leaders and other influential figures are still in charge of the nation's economy and the situation is getting worse by every second, every minute, every hour and every month.

COYLIB believe in the principles of democracy, but no democratic country knowingly elects leaders to debase their country, allow foreigners to torture their people, bankrupt the domestic banks, sell their international banks, incorporate divide and rule tactics, dissolve boards without reasons, cripple the private sector, and infest every citizen with reckless policies.

The President's remarks during the commissioning of the Revival Restoration Centre of the Assemblies of God church at Roman Ridge, in Accra, on Saturday attest to the elements of frustration and the unremitting choice of words to describe the people who elected him to the highest office of the land. President John Mahama says “Ghanaians have very short memory”, which makes them easily forget about the achievements made by his administration and we believe such rhetoric's from the President is unfortunate and threatens the peace in the country.

The million dollar question is: What is the point of being in leadership position and you cannot lead?

The Government habitual act of blaming all problems after five years in power on his predecessors remind COYLIB of a popular quote from Joseph Conrad, “The belief in a supernatural source of evil is not necessary; men alone are quite capable of every wickedness''. Similarly, President John Mahama had shown enough willful blindness which indicates that he is purposefully failing.

POVERTY UNDER THIS NDC GOVERNMENT IS WORSENING AND UNPRECEDENTED: The living conditions of majority of Ghanaians have deteriorated. The constant water crisis, the energy crisis, petroleum and gas increment, growing unemployment, coupled with higher school fees had already culminated the bad situation of Ghanaians to worse conditions. The rising cost of living and increases of food prices and other basic amenities in life had now become difficult for the ordinary Ghanaian. The government failure to address these basic issues had not only dampened the spirit of its citizens but they have become slaves in their own sovereign state.

DEBT FINANCE ISSUES WITH THE NDC GOVERNMENT: The bank of Ghana's Monetary Policy report of 18th September 2013 states, “The stock of public debt increased to GH¢43.9 billion (49.5% of GDP) at end of August 2013, from GH¢35.1 billion in December 2012. Of this, the domestic component amounted to GH¢24 billion compared to GH¢18.5 billion in December 2012''.Every single citizen owes GH¢1,756.Every household in the country contains an average of five people and for the past five years nearly GH¢500 of debt per person in each household added. A total of GH¢12,500.00 of debt added to every household whilst the average household income is only GH¢6,500.00. This is not only a worrying trend but a growing concerned for generations to come. The huge debt was as a result of the reckless expenditure of the 2012 and the excessive borrowing from the domestic market. The 2014 budget does not offer concrete solutions in solving the numerous problems.

CORRUPTION HAS TAKEN OVER THE MORAL FIBRE OF THE NATION: US State department report for 2010 on human rights in Ghana indicates that there was corruption in all branches of government. The Public Accounts committee of Parliament also uncovered numerous cases of misapplication, misappropriation, embezzlement and continues misused of funds by government and all state departments. The European Union (EU) political dialogue meeting with Ghana government held on July 3, 2013 also hit it right with the increasing trend of corruption in the country. The latest report from transparency international also rank's Ghana's educational sector as highly corrupt. The inference made by these watchdogs undermines the credibility of the President and its appointees in government. Their constant denial of such corrupt practices is not only damaging our image international but it has been a breeding ground for corruption as a nation. The ongoing trial of Woyome, the abuse of the educational system, CP, AZONTABA, GYEEDA, SADA, ISOFOTON, SUBAH and the current Merchant bank sales brouhaha attest to the situation Ghanaians are faced today. The gross disregard of the law, ruling with impunity and lack of prosecution has resulted in the ever-increasing trend of corruption in the country.

DELIBERATE ABUSE OF COMMISSION OF ENQUIRIES: This Executive instrument (Article 278-283) was provided in the 1992 constitution to enable the President investigates certain matters of public interest just as the law courts do and make their findings known, but that has not been the case under this government. Ghanaians only hear of recommendations but there is no action taken. The past five years had witnessed enquiries from Ghana at 50 to GYEEDA and currently Judgement debt commission which had yielded nothing positive for Ghanaians and we believe is a political agenda adopted by the President John Mahama to waste tax payers' money since all recommendations are abandoned without any action taken against the culprits.

NATIONWIDE STRIKES BY VARIOUS ORGANISATIONS AND WORKERS IN THE COUNTRY: We have witnessed an unprecedented number of strikes across the country since this government came to power by various workforce and sectors in the country. The most recent one was the threat coming from the Trade Union Congress (TUC) who are affiliated to about more than fifteen unions across the country. The Secretary General of the Trades Union Congress, Mr. Kofi Asamoah says; ''the leadership of organised labour is fed up with holding meetings with government when the agreements reached at those meetings are disregarded'', (Myjoyonline, 9th Oct 2013).The statement from the Secretary made it self explanatory. The President had continuously demonstrated his lack of leadership and his inability to spearhead such negotiations which automatically affects our economy. The President appointees lack the technical know-how, skills and abilities, the moral authority, and the gross incompetency to solve the problems facing Ghanaians.

COALITION OF YOUNG LIBERALS (COYLIB) will like the President John Mahama to step down as early as possible with all his entitlements untouched. We won't replace our founding principles (constitution) as a nation but will reapply them by calling for a 'Coalition Government' which involves all political parties in the country to join hands to solve the challenges facing Ghanaians as a temporal measure from 1 January 2014 until the next general election in 2016.We believe the constitution supersedes any other book of the land but at the same time the constitution had been disregarded by the President John Dramani Mahama. The only alternative Ghanaians have now is their representatives in Parliament and COYLIB will want these representatives to help by putting things right for the people who voted for them irrespective of your political affiliation.

Our principle of equal rights must not be curtailed by the representatives but must be adhere to in these difficult times.