VOLTA CHIEFS TO TURN THEIR GUNS ON THEIR MP’S. 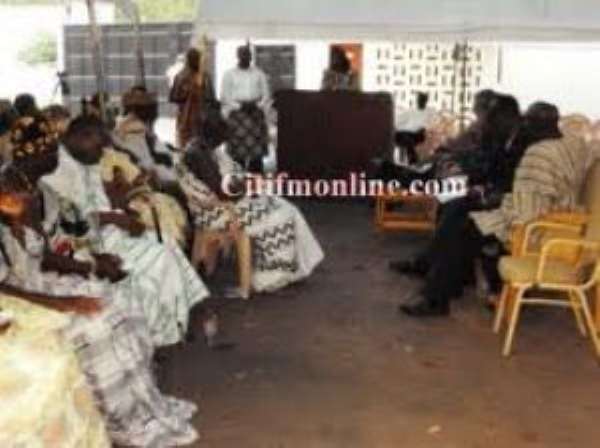 Prior to the December 7, 2012 presidential and parliamentary elections, president John Dramani Mahamah and his NDC party took their election campaign to the Volta Region to canvas for more votes to emerge the winner of the elections.

On October 5, 2012, a news report that was posted on MYJOYONLINE .COM website had the president appealing to the electorates to vote for his NDC parliamentary candidates to make his work as the president easier for him

The news report headlined,” Make my work easier, vote for my MPs-Mahamah tells electorate” quoted the president as saying “you vote for the president, you have to give him majority in parliament so that it would make his work easier”.

With this at the back of their mind, the electorate in the Volta Region went to the polls with one mission and that was to vote massively for Mr. John Dramani Mahamah and his NDC parliamentary candidates which they executed very well.

Volta Region is made up of twenty-six [26] constituencies when it comes to presidential and parliamentary elections in Ghana.

Out of the twenty-six parliamentary constituencies that the various political parties filled their parliamentary candidates to contest the seats, National Democratic Congress, NDC won 25 seats leaving the remaining seat for an independent candidate to grab.

All the 26 candidates of the New Patriotic Party [NPP] who contested for the parliamentary seats in the region, none of them won even one seat in the region in the last election.

This confirms the fact that when it comes to holding a parliamentary elections in Ghana, Volta Region, is indeed the “NDC WORLD BANK” no matter how hard other political parties fight to win a seat in the area.

A swing region or battle ground or purple region in Ghanaian politics refers to a region in which no single candidate or political party has over whelming support in securing that region's Electoral College or population votes.

As the chiefs and people of Volta Region demonstrated to all in the last parliamentary elections, they voted massively for their party NDC parliamentary candidates in all the 25 constituencies except that in Akan constituency where an independent candidate won the seat.

So it makes one to wonder why the chiefs and the people in the region are descending heavily on the president for lack of development in their various constituencies and not hold their MPs accountable.

Let us look at the parliamentary election results in three selected constituencies in the Volta Region where the chiefs and the people are blasting the president for lack of development in those areas.

Now let us pick these three constituencies from which the chiefs and people were reported to have taken the president to the cleaners and ask them why they are leaving their MPs out of blame for lack of development in their areas?

First let us look at Hohoe constituency where the NDC candidate Dr.Mrs. Bernice Heloo had 40,486 votes representing 81.58 percent as against the NPP candidate Oduro-Adibo Janet Emefa who polled 6,358 representing 12.8 percent.

Let us once again go to Kpando constituency where the NDC candidate Dellah Sowah polled 19,243 votes representing 79.11 percent as against an independent candidate Richard Akplotsyi who had 2,474 equals to 10.17 percent and to that of the NPP candidate Theresa Akosua Sewa who polled 2,307 representing 9.48 percent.

Where was Dellah Sowah, the MP for the area when the chiefs and the people of Kpando were ripping the president cloak for not fulfilling his promises to them?

The members of parliament representing the areas mentioned where the chiefs and the people are in arms against the president for not bringing development into their areas are suppose to hold public meetings with their residents to collect their opinions and present them to the house for action on it.

On the other side the chiefs and people in the constituencies are suppose to hold durbars and summon their MPs to brief them about how far they have gotten to as far as pushing their developmental agenda high for positive action to be taken on it.

A critical look at the situation indicates that the link which is suppose to be between the chiefs on one side and their members of parliament on the other side is missing which has left the chiefs and the people to live in limbo or in the wilderness.

The president through the minister of finance presents a budget to parliament for approval by the law makers including the MPs for Hohoe, Kpando and South Dayi, which might include construction of roads by the ministry of roads and highways.

It is time the chiefs and people of the Volta Region, start turning their guns on their MPs demanding for accountability for their areas development and makes the attacks on the president the last resort.

In the next edition, we will discuss how best the chiefs and the people of Volta Region can take the development of their areas into their own hands and move on with it.