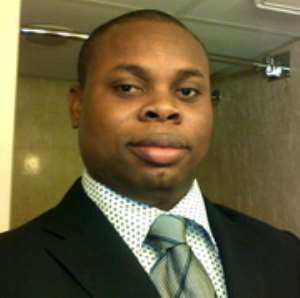 I have taken this decision in the best interest of my personal convictions that whilst unfettered power is recipe for absolutism, all checks and balances within government must be orderly especially when professional jealousy, integrity and one's ability to execute mandates are at stake.

Following the successful National Forum on Single Spine Pay Policy held in Ho in August this year, a sixteen-member Post-Forum Implementation Committee on the Single Spine Pay Policy (SSPP) was publicly inaugurated on August 22, 2013 by the Ministry of Employment and Labour Relations under the Chairmanship of Hon. Paul Victor Obeng.

I was invited by the Ministry of Employment and Labour Relations to be a member of the 16-man committee. I believe my invitation was due in part to the pre-implementation analysis of the predictable repercussions my think tank, IMANI did on the wholesale implementation of the pay policy.

The Terms of Reference for the Post-Forum Implementation Committee on the Single Spine Pay Policy (SSPP) were hinged on ''sustainability of the pay policy” having of course realized that the pay policy allegedlyconstituted nearly 70% of all government generated revenues in the process eclipsing resources critically needed for national capacity building and investment in facilities to enhance productivity. An important resolution reached at the National Forum on Single pine Pay Policy in Ho in August 2013, was that “Subvented agencies [of government] which can be on their own should be identified and weaned off government subvention without delay”

There are over 130 of such agencies and counting. A subcommittee of seven persons within the 16-member post-forum implementation committee was tasked by the Minister of Employment and Labour Relations to begin discussions with the first set of identified agencies to be weaned off. Suffice to say the first set to be weaned off was announced in the 2014 budget statement. Together with the CEO of the Fair Wages and Salaries Commission, the Lawyer for the Commission, two senior representatives of the Public Sector Reform, and a senior representative of the Ghana Employers Association, we had began meeting the subvented agencies who were eager to discuss the modalities for a phased parting from government's payroll. The subcommittee listed the below it had started meeting and engaging.

Unfortunately, the subcommittee has been asked by the Finance Ministry as communicated to the CEO of the Fair Wages and Salaries Commission that we stop our meetings until further directives are issued. It may be possible that the Finance Ministry is concerned about compensation, possible retrenchment and unemployment that may result from the sub-committee's work. However, we had our work cut out as we were guided by the Subvented Agencies Act, Act 706 and in particular by the urgency of reducing the wage bill.

I consider this intervention as needless; a usurpation of the authority of the Ministry of Employment Labour Relations, will crucially affect the successful completion of the sub-committee's work and ultimately delay the much needed reforms to reduce the burden of the public workforce on the wage bill.

I have taken this decision in the best interest of my personal convictions that whilst unfettered power is recipe for absolutism, all checks and balances within government must be orderly especially when professional jealousy, integrity and one's ability to execute mandates are at stake. I thank Hon. Paul Victor Obeng, The Ministers of Employment and Labour Relations, Finance Ministry, the CEO and Staff of the Fair Wages and Salaries Commission and my fellow Committee Members. I wish you every success in the years ahead.

As always, IMANI will be willing to contribute to national debates on critical issues when invited and properly ordered. Meanwhile, for a successful rationalisation of wages and salaries to meet national productivity requirements that aligns with policy reforms that are urgently needed, the following are critical first steps.

1. A total skills rationalization is needed within the public service. That 75% of all public sector workers are classified as semi-skilled and unskilled is worrying.
2. The Controller and Accountant General' must sublet payroll management to private software companies. It is a worrying that whilst recruitment within the Ministries, Departments and Agencies are on hold on paper, there are suggestions of back door recruitment practices which are unknown to the Fair Wages and Salaries Commission which ultimately find space on the pay roll. It is very possible that when a serious labour audit is done, the 70% figure reported to be the total toll on our internally generated revenues may actually be substantially lower.

3. Undertake a proper alignment of functions to save money. The prioritisation of sectors that are revenue-consuming more than their revenue-generating ones must cease. In fact, there are essential sectors that are underfunded in favour of sectors that generate little revenue, if at all, and are non-essential administrative sectors.

· For example in 2011, the Ministry of Food and Agriculture, the country's second income earner received the 9th largest budget allocation, and tourism, the country's fourth money maker came in 25th place (of 35 MDAs) receiving a small allocation of GHS 17,225,167, beaten by the Ministry of Information, the Ministry of Information, another administrative sector that receives an allocation almost twice the size of the Ministry of Tourism's, and the Electoral Commission in 2011. Another sector that might have its mandate leaned is the Ministry of Chieftaincy and Culture which for the year 2012 stated one activity item which was to coordinate the National Festival of Arts and Culture. Between its role in settling disputes and promoting culture, the Ministry of Chieftaincy and Culture can be taken up by the Judicial sectors and the tourism sector and allowing Government to potentially redirect GHS 30,338,694 of which 89% went towards wages and salaries.
· It is also gravely worrying that the DVLA that has vast amounts of opportunities to be a money earner is underperforming due to the subventions it receives from the government. In 2011 the DVLA came top in terms of allocation to personal emoluments (GHS 2,089,155). Meanwhile it was only able to generate (GHS 1,832,277).
· Why should an administrative sector such as the Ministry of Information & Media Relations receive GHS 100,120,293 in the 2014 Budget, while the Ministry of Transport, an infrastructural sector, is receiving GHS89, 949,128?
· Again in the 2014 Budget Statement, the Office of Government Machinery is receiving an increase of almost 12% to its budget allocation over 2013. However, it would seem that some of the functions this agency intends to take on could be done by other MDAs. For example, scholarships for second cycle students and students studying abroad can be administered by the Ministry of Education. Hence it would seem that this budget could be reasonably decreased.

4. Political and economic Decentralisation of governance in order to reduce the burden on central government. The central government must begin to shelve the role of directly recruiting and paying teachers, doctors, nurses, from Accra. This function should be undertaken by district assemblies and metropolitan authorities.