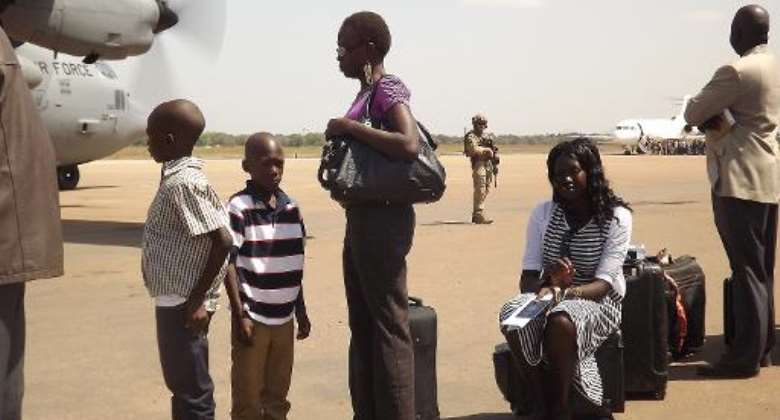 A US army soldier stands guard as a US army aircraft remains on the runway ready to evacuate American nationals who are leaving due to recent unrest and violence in South Sudan, on December 21, 2013, in Juba. By Samir Bol (AFP)

Juba (AFP) - US President Barack Obama warned South Sudan's rebel forces against a military coup after four American servicemen were wounded in an attack on their aircraft in the increasingly unstable country.

"Any effort to seize power through the use of military force will result in the end of longstanding support from the United States and the international community," the White House said in a statement.

Obama stressed that South Sudanese leaders "have a responsibility to support our efforts to secure American personnel and citizens in Juba and Bor", the capital and a rebel-held flashpoint town.

The president's comments came after three CV-22 Osprey aircraft came under fire as they headed to Bor to help evacuate Americans from South Sudan, which is teetering on the brink of civil war.

The attack damaged the aircraft, forcing them to divert to Uganda. The wounded were then flown to Nairobi for medical treatment and are now in "stable condition", the Pentagon said.

The attack underlined the increasingly dangerous situation in South Sudan, where at least one United Nations base has also come under attack in recent days -- with the deaths of two Indian peacekeepers and possibly dozens of civilians.

The United States, Britain, Kenya and Uganda have been carrying out evacuation missions for their nationals.

Oil companies have also flown out their employees after the death of at least five South Sudanese oil workers Wednesday, with Chinese state oil company China National Petroleum Corp confirming it was pulling out its staff.

Oil production accounts for more than 95 percent of the country's fledgling economy.

South Sudan, the world's newest country, split from Sudan in 2011 after a two-decade civil war that left two million people dead. But it has never been able to heal its own ethnic rivalries.

The fighting has both ethnic and political dimensions, as troops loyal to President Salva Kiir, an ethnic Dinka, battle forces backing his sacked vice president, Riek Machar, a Nuer.

Kiir accuses Machar of having tried to mount a coup, but Machar denies that and claims Kiir is conducting a violent purge.

At least 500 people have been killed in Juba alone in six days of fighting.

The US aircraft that came under fire, CV-22 Ospreys, are flown by US Air Force Special Operations forces to conduct rescue missions. They are also used by the Marines.

The United States has also deployed 45 combat-equipped troops to South Sudan to protect its embassy and personnel.

Tens of thousands of South Sudanese have fled their homes, many seeking shelter at UN bases amid warnings the impoverished nation was on the brink of all-out civil war.

"I am afraid. I just can't imagine being forced to become refugees again," said Susan Nakiden, a South Sudanese woman among the thousands sheltering at a UN base in Juba. The mother of three said she had already been forced to flee her home during the Sudanese civil war.

Local resident John Luga said people were living in fear, whatever their clan.

"Whether they are Nuers or Dinkas, the suffering is for all, the future is not certain," he told AFP.

"We have lost contact with the commander... and there are reports he has joined the forces of Riek Machar," Sudan People's Liberation Army spokesman Philip Aguer told AFP.

Aguer also insisted that government forces were in control of the area around Bor, about 200 kilometres (125 miles) north of Juba, and an army operation was under way to take back the town seized by rebels this week.

"There is fighting, but we are supported by air units," he said.

He also insisted that the key oil-producing Unity state remained under government control despite rebel claims they had taken it.

But as oil workers flee, the loss of the state capital in a region awash with guns and a long history of rebellion is a major blow.

"The potential for oil wealth to exacerbate the current power struggle should not be underestimated," said Emma Vickers of Global Witness, an international campaign group.

"If rebel forces were to capture the oil fields, they could effectively hold the government to ransom."

US Secretary of State John Kerry has dispatched his special envoy for Sudan and South Sudan, Donald Booth, to the region to encourage talks between the warring factions.

UN Secretary General Ban Ki-moon has called for an end to hostilities and urged the leaders of Sudan's warring factions "to resolve their personal differences through dialogue immediately".