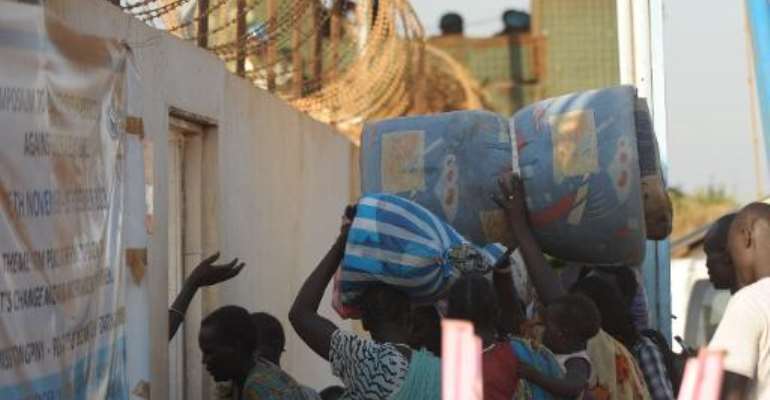 Residents of Juba, the capital of South Sudan, arrive at a UN compound on December 20, 2013 to seek shelter. By Tony Karumba (AFP)

Juba (AFP) - Fighting escalated on Saturday in South Sudan, with a top commander in the country's key oil-producing region defecting to the rebels and foreign governments scrambling to evacuate their nationals.

A US military aircraft was shot at as it was engaged in evacuation operations in Bor, the rebel-held capital of Jonglei state, a diplomatic source and Ugandan military officials said, with some US military personnel injured in the incident.

The upsurge in hostilities in the world's youngest nation came despite an offer from President Salva Kiir to open talks with his former deputy Riek Machar, who is accused of having started the fighting by attempting a coup.

Machar in turn accuses Kiir of conducting a violent purge, and has quickly built up a rebel army to take on the central government on several fronts.

At least 500 people have been killed in Juba alone in six days of fighting, while tens of thousands have been displaced -- many of them seeking shelter in UN bases across the country amid warnings that the impoverished nation is on the brink of all-out civil war.

Neighbouring Kenya on Saturday ordered troops into the country to evacuate Kenyans stranded there, following Uganda, which has already sent in a special forces unit to help evacuate its nationals.

In Juba fresh bursts of gunfire rang out at hourly intervals throughout the night, prompting a new wave of terrified citizens to attempt to flee at dawn, an AFP reporter said.

Juba's main bus park was crowded with people struggling to find space on public transport, while foreigners have headed to the airport where several countries -- including the United States and Britain -- have sent military transport planes to evacuate their nationals.

Fighting has spread to the town of Bor, which lies some 200 kilometres (125 miles) north of Juba and which was seized by rebels during the week. South Sudan's army spokesman said an operation was underway to retake the town.

"We are moving towards Bor... there is fighting, but we are supported by air units," Philip Aguer, spokesman for the Sudan People's Liberation Army (SPLA), told AFP.

The Ugandan military and a diplomatic source said a US aircraft was shot at in Bor on Saturday.

Aguer said that in northern oil-producing Unity State, a key commander -- Major General James Koang Choul -- appeared to have defected to Machar's side.

"We have lost contact with the commander... and there are reports he has joined the forces of Riek Machar," Aguer said, but he added that government forces were still in control of the area.

"There was shooting in Bentiu overnight ... but I can be clear, Unity state is still under SPLA control, he said.

Oil companies have been evacuating workers -- with Chinese state oil company China National Petroleum Corp (CNPC) has confirmed it was pulling out its staff.

Oil production accounts for more than 95 percent of South Sudan's fledgling economy, with the campaign group Global Witness warning that "if rebel forces were to capture the oil fields, they could effectively hold the government to ransom."

Neighbouring Sudan has also warned it is concerned over the fate of vital oil flows as fighting spreads in South Sudan.

At least five South Sudanese oil workers were killed Wednesday in Unity state after attackers stormed their compound, with a senior UN official saying they were singled out for their ethnicity.

Although the unrest appeared to start as a result of a political spat, the violence has taken on an ethnic dimension pitting Kiir, an ethnic Dinka, against Machar, a Nuer.

South Sudan gained independence from Sudan as part of a peace process after a two-decade civil war that left two million dead, but it has never been able to heal its own ethnic rivalries.

US President Barack Obama has warned that hopes for South Sudan at its independence from Sudan in July 2011 are now "at risk", amid reports from rights groups of an upsurge in ethnic killings.

US Secretary of State John Kerry said Friday he was sending Donald Booth, his special envoy for Sudan and South Sudan, to the region to encourage talks between the warring factions.

United Nations Secretary General Ban Ki-moon on Friday issued an appeal for an end to hostilities and urged the leaders of Sudan's warring factions "to resolve their personal differences through dialogue immediately".