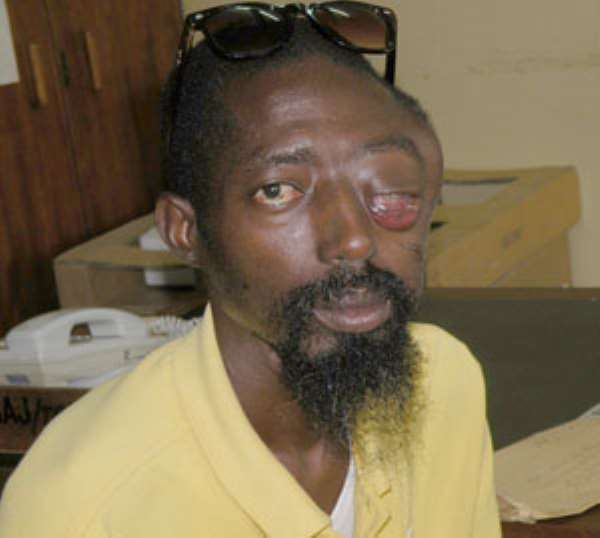 The victim, Simon Deffour, 39, cannot discharge his responsibilities as the evangelist of the Theocracy Seven Day Church at Aflao as a result of the attack by the police.

He has poor blood circulation and his nervous system is gradually deteriorating.

Mr Deffour is currently pleading with philanthropists and other benevolent organizations to help him undergo surgery to save his life.

Deffour was brutalized and unlawfully detained by detective Buabeng and Sgt Vincent Agbenoo on July 14, 2003 at Aflao in the Ketu South District of the Volta Region.

Since then, all attempts by the victim to get the main perpetrators and the Ghana Police Service to address the matter had proved futile.

As a result, the victim reported the case to the Commission on Human Rights and Administrative Justice (CHRAJ) at Denu after three years of frustration.

To date, the Ghana Police Service has failed to pay for the victim's medical cost.

Recommendations by CHRAJ to the Director General of the Police Intelligence and Professional Standards (PIPS) in August 2012, after earlier attempts, are yet to be addressed.

According to DAILY GUIDE's investigations, the case was first reported to the Denu CHRAJ office on November 2, 2006.

The Denu CHRAJ wrote to detective Buabeng and the Aflao Police Station for their comments.

However, the police failed to respond until July 21, 2011 when it issued a report.

The report, which was signed by the Aflao District Commander, confirmed the arrest of Simon Deffour, but the docket was transferred to the Divisional Command in Keta.

The District Commander also informed the Commission that Detective Corporal Buabeng resigned from the Ghana Police Service in 2005 and was living in the United States of America.

Attempts to trace the docket from the Divisional Command in Keta also proved unsuccessful.

Meanwhile, Sgt Vincent Agbenoo, who assisted the D/Cpl Buabeng in arresting Deffour, in a reply to a CHRAJ letter addressed to him in 2008, distanced himself from the incident, saying he only encouraged the two to proceed to the police station peacefully.

CHRAJ's investigation revealed that Deffour, who resides in Aflao, lodged an assault and death case against him to the Aflao Police Station on February 24, 2003.

Detective Corporal Buabeng, who was directed to hand the case, later advised the victim to take civil action against the culprits.

Some months later, however, the detective again asserted that one Mr Luka had also made a report accusing Deffour of encroaching on his land.

Deffour then advised the detective not to get involved in the case since he (detective) claimed it required a civil action.

On July 14, 2003 at about 5:00pm, Buabeng, in the presence of some witnesses, pounced on Deffour without provocation, dragged him to the police station and subjected him to severe beatings.

Despite the bloody eyes of the victim and plea to be allowed to visit the hospital, the detective locked him up in a cell until he was granted bail the next day.

He then visited the hospital where a doctor drove him to the police station to request a medical form from detective Buabeng.

The victim was then transferred to Korle-Bu Teaching Hospital in Accra due to the severe damage to the left eye.

A directive by the Aflao Police to Buabeng to pay for the medical costs was ignored.

CHRAJ also identified a case of collusion between detective Buabeng and the officer assigned to deal with the matter at the Keta Divisional Police Command.