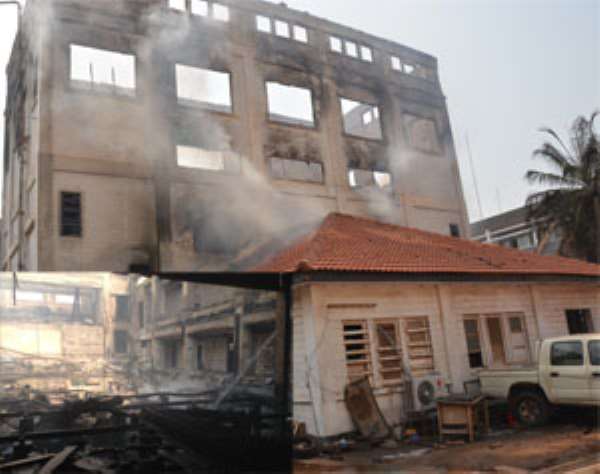 The old Parliament house in ruins
The Old Parliament House, one of Ghana's historical landmarks housing the Judgement Debt Commission, has been destroyed by fire, rendering the place uninhabitable.

The building, located on the High Street, Accra, also housed the Commission on Human Rights and Administrative Justice (CHRAJ) and the Economic and Organized Crime Office (EOCO).

The huge fire is reported to have started inside the building around 4:00am in the early hours of yesterday, but what actually sparked the blaze is still unknown even though the Ghana National Fire Service (GNFS) is on record to have arrived at the scene a few minutes after the outbreak.

The fire-fighters could not salvage any useful item from the inferno, at a time they are said to have been well resourced, as trumpeted by the Fire Service Board Chairman, Amadu Sorogho.

Firemen had been helpless in recent fire outbreaks including market fires where little or nothing was salvaged.

The extent of damage has rendered the CHRAJ, some departments of EOCO, as well as the Judgement Debt Commission without offices.

This particular outbreak appeared to have ruffled the feathers of the security agencies, as almost all heads of the various agencies were at the scene to lend moral support to the fire-fighters.

Awaiting Disaster
Interestingly, even before the cause of the fire is made public, the warning signs had been there for a couple of years, but nothing was done about them.

CHRAJ staff in particular had been complaining about faulty electrical gadgets and other obsolete equipment in the building without any official intervention.

For instance, on two occasions including last Monday when the Sole Commissioner sat, smoke was detected in some of the offices within the building, but it was hurriedly stopped to prevent a disaster.

GNFS Analysis
Mr. Gaisie said, 'We had a running call this morning at 4:01am from a security of this facility reporting that the Old Parliament House was on fire. We responded swiftly and realized that the fire was well alight so other reinforcement also came in from some stations.'

He said the GNFS brought nine appliances comprising four multi-purpose water tenders, two turn-table ladder tenders, three water tankers, and another tanker from the Human Security Office of the National Security, headed by Gen Joseph Nunoo-Mensah, as well as a tender from the Ghana Armed Forces.

'Operationally, our concern was to confine the fire and check it from spreading to the eastern and western periphery of the building. For now we are still conducting some salvaging to find out if some valuables are there.'

Mr. Gaisie said, 'We will not be able to tell you until we finish the full salvaging. Investigation is still ongoing together with the police and other relevant agencies. It will be premature now for us to tell you the exact cause of the fire.'

Police View
Regional Commander CDOP Yohuno said, 'We got information about the fire outbreak at around 4:00am. Luckily for us we had most of our men on night patrols so they came in to cordon off the place.'

'Our intention was to provide security for the fire-fighters and also to prevent intruders from entering the scene.'

He said they deployed more than 200 police officers together with Crime Scene officers to monitor the situation.

Military Concern
Chief of Defence Staff Vice Admiral Quashie said, per the analysis of the GNFS, 'there are some cracks in the building so the building has to be assessed as to whether it is safe to go in; so we are saying nobody should go in.'

'We are bringing the 48 engineers to do proper assessment of the structural situation of the building before we issue our report,' he said.

Attorney-General's Promise
According to Mrs. Appiah-Oppong, the building housed three very important institutions: CHRAJ, EOCO and the Sole-Commissioner and her outfit would make sure they resume work immediately.

'We are assuring the public that this is not going to affect the work of these three institutions. The Chief of Staff is here to make sure that whatever these institutions need to continue working almost immediately will be done,' she said.

Chief Of Staff
On his part, the Chief of Staff said: 'We have received briefings from the police, fire service, military and the AG. Investigations are ongoing. There is every confidence from the government that the anti-corruption drive will continue. The President and his vice have been briefed so I would ask that you continue with your media work and leave the investigations to the relevant authorities to do a diligent work and at the appropriate time they will brief you.'

Later, the Judgement Debt Commission issued a news release through its Public Relations Officer, George Dove, saying that though the fire incident was 'severe', it was not going to affect the commission's work.

He said the commission would relocate and the new location would be announced soon.