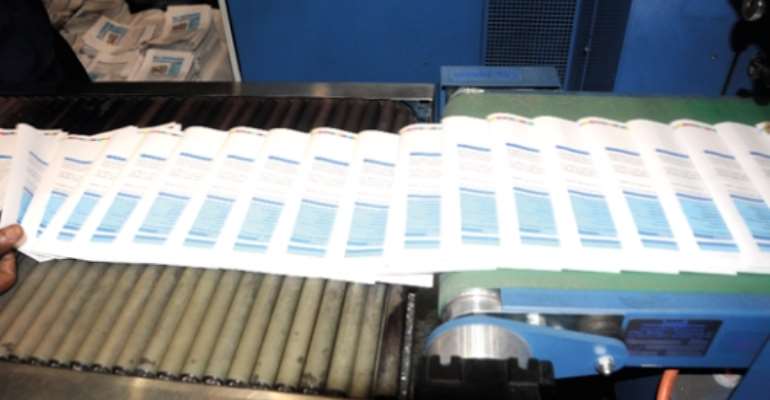 The Graphic Communications Group Limited (GCGL) has given a further boost to its operations with the inauguration of a technologically-based quarter fold machine for the printing of books and other journals.

The new addition forms part of the management's effort to make the Graphic Press a general printing production line instead of focusing solely on newspaper printing.

Stakeholders in the publishing, printing and advertising industry attended the launch in Accra yesterday.

Quarter Fold Machine
The machine has the capacity to print 70,000 cuts of a 32-page full colour section within an hour.

It can also print 20 million books within two months.

Inaugurating the machine, the Minister of Education, Professor Naana Jane Opoku-Agyemang, commended the GCGL for the achievement, saying the company had set the pace for others to emulate.

She said having acquired that machine, the GCGL could expand its frontiers to other areas apart from the business of newspapers.

Foreign printed books
Prof. Opoku-Agyemang expressed the hope that now that the government had waived tariffs on materials used for the production of books, Ghanaians would take advantage and print more books locally.

Prof. Opoku-Agyemang, a former Vice Chancellor of the University of Cape Coast, announced that to promote the reading culture among children, she would, next year, launch a national series dubbed: “Children writing for children,” which would involve schoolchildren writing their own stories to be compiled into a book.

She said as the immediate past Board Chairperson of the GCGL, it was her desire that the company should become a good reference source of information as it was the case with other internationally recognised newspapers.

Managing Director
Earlier in his welcoming address, the Managing Director of the GCGL, Mr Kenneth Ashigbey, expressed worry that the local component of the print industry had been virtually non-existent for many years because the industry players lacked capacity and were uncompetitive.

“For too long, Ghanaian businesses have lost out because we have not been able to come together to create that critical mass we require to compete on the global stage…,” he said.

Mr Ashigbey, therefore, called on the government to act as a catalyst to bring Ghanaian firms together for “this battle that confronts us”.

Industry challenges
Mr Ashigbey identified lack of funds and delay in payment for government contracts as some of the biggest challenges facing printers and publishers.

He said development adversely affected cash flow, compelling printers and publishers to borrow at high interest rates and appealed to the government to help deal with that challenge.

The Board Chairperson of the GCGL, Dr Doris Yaa Dartey, said as a member of the Ghana Association of Writers, she had been encouraging the culture of book reading in the country and called on stakeholders in the industry to team up and launch a campaign to promote the reading culture.