Gov. T.A Orji Makes History On How Not To Spend Abia Money 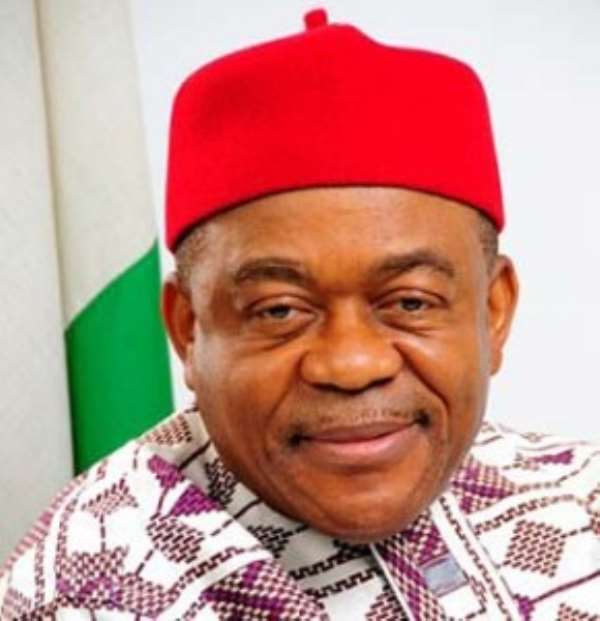 The City Reporters freshly surprised us with another dishonorable feat that Gov. Theodore Ahamefule Orji of Abia State has achieved. As many of us honest observers of his government knew, the governor has been making a leftist's history in that state. When one thinks that he may be learning the tenets of good governance, he throws hope above bar.


If what the media platform wrote is anything to go, then Nigerians should know that a whopping sum of N23.56bn was being expended annually by Gov. Orji government, not on infrastructure nor on any people-oriented project, but on sycophants, media houses, politicians and charlatans.

We could recall that The City Reporters informed the world this year that one Mr. Ugochukwu Emezue, who was the Chief Press Secretary of Gov. Orji, was disgracefully sacked on October 22, 2013, because he was alleged not to be judiciously protecting the shoddy activities of the governor and casing up for the ineffectiveness of the T. A Orji's administration.

This was happening without the governor minding the economic travails that our people of Abia State have come to endure under this kind of unprecedented democracy that Gov. T.A Orji is practicing. Not long ago, it was treatised by an observer that “Anybody that says Abia generates two hundred million monthly is economical with the truth. Keke in Aba alone is about 16, 000. Assuming that 12, 000 Keke are on the road daily with 100 naira each Keke pays to purchase the government-sold ticket, it amounts to One Million Two Hundred Thousand Naira only. Multiply that by 25 days; is it not thirty million naira?

“This amount is from Kekes that ply in Aba alone. We are not talking about others in other places and other areas the state government generates revenue from. So, it's laziness to say that IGR in Abia is 200 million naira only. It simply portrays Orji and his aides as a people that are satisfied with Federal Allocation, and perhaps, use the internal generated resources to settle their cronies”.

The annoying side of the whole thing is not the N23.56bn allegedly being expended annually by Gov. Orji government on sycophants, media houses, politicians but the “the monthly monies estimated at N10bn annually given to prints and electronics media organisations, journalists on Abia state pay roll who have turned the state to milking ground as well as an army of hirelings and professional praise-singers who follow the governor about,” informs The City Reporters.

Ndi-Abia have to be worried about the reportedly largesse that has been going on in the Ochendo government, where individuals such as Prof. Joe Irukwu, Ike Nwachukwu, Dr. Anagha Ezeikpe, Chief Obaewu Onwuka, Elder Emma Adaelu, Adolphus Wabara, Herbert Orji, Vincent Ogbulafor, Onyema Ugochukwu, and Chukwu Nwachukwu, allegedly receive the sum of N25m, N10m and N5m monthly from Abia state governor for who knows what.

While the tone of Jack Robison was being pronounced, that mentioned sums and their earners seemed to be just the beginning of the rascal free-spending, which keen observers noted was because of the 2015 election in which Gov. Orji has a great interest for the contestation of the Senate position, three senators representing Abia State in the persons of Eyinnaya Abaribe (Abia South Senatorial Zone); Uche Chukwumerije (Abia North Senatorial Zone); Nkechi Justina Nwaogu (Abia Central Senatorial Zone), were fingered to be among the beneficiaries of the alleged loot of the Abia State treasury.

The issue of the whereabouts of the Local Government monthly allocation of Abia State, has been a forgone issue, as our people have asked questions upon questions about this, but the governor was yet to come up with convincing answers, not even minding that our people are still at amiss why Ndi-Abia hardly enjoy the Federal Government scholarship programme organised for Local Government workers, even when the governor supposedly receives the grant meant for this project from the FG.

As if there was a state dialogue in Abia State that the Abia resources must be shared among certain individuals, the Abia House of Reps members, as The City Reporters informs, like Hon Nnenna Elendu Ukeje, Hon Eziuche Ubani (Obingwa, Ugwunagbo and Osisioma Federal Constituencies); Uzoma Abonta (Ukwa West/East); Chinenye Ike (Isiala Ngwa North/South); Arua Arunsi (Arochukwu/Ohafia) and other members of the state House of Assembly and so on purportedly share in that monthly loot.

Although, Ndi-Abia have been telling Gov. Orji that his style of governance is how not to govern, but he is yet to embrace the people's truth. If the story by The City Reporters holds water, it behooves on all the stakeholders of Abia State irrespective of their religious and political inclinations to stop this governor from further damage of our collective interest and aspiration of making the state a better place for our children, and not a better place for select of individuals. The governor must perpetrate and navigate his compass out from any forms of impunity and escalating brigandage that cost the state its hard-earned resources.