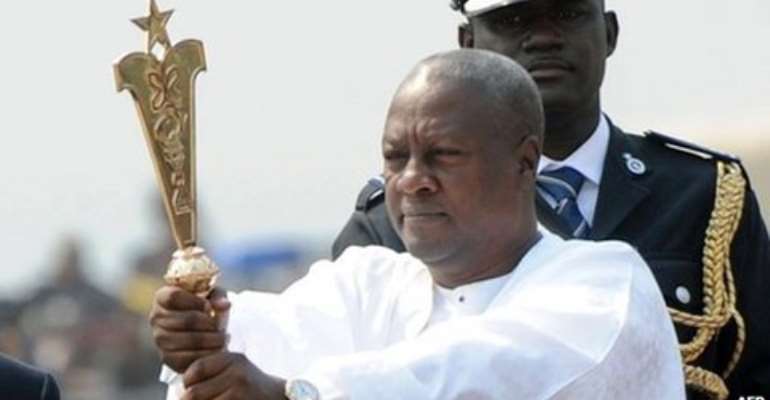 President John Mahama says his government will “transit from first to second gear” in 2014, after “using this year to lay a very solid foundation for the economy”.

“The state of the nation address is going to map out a solid vision as where we want to take this country,” he told the Council of State at the Peduase Lodge at Aburi in the Eastern region Wednesday.

He said: “Based on the state of the nation address, the medium term development framework is being prepared and finalised and it will be presented to Parliament this year as required by the Constitution and that medium term framework will show exactly what we want to do in this country”.

The President conceded that 2013 has been a difficult year but said things will get better in 2014.

“This year has been quite challenging. We all know we've had to deal with major crises; industrial unrest, market fires, energy crisis, an election petition, difficulties with the economy, high deficit, huge wage bill and all that”.

Hinting about what to expect next year, in terms of developing the economy, President Mahama said: “We think that it is time to diversify our country's economy.”

Explaining the dire need for that to happen, he said Ghana's economy has not seen much transformation from its primordial state since the 20th century.

“In 1927 our major exports were gold, timber and cocoa. Today in the 21st century in 2013, our major exports are [still] gold, cocoa, and timber has fallen out because there are no more trees to be cut, otherwise if there were trees, we'll still be exporting timber and so we believe it's time to move the economy from just being primary produce exporters to advancing into secondary and tertiary processing of our raw materials and also empowering the manufacturing sector to grow”.

According to him: “Of all the sectors, the manufacturing sector has been the slowest in growing and even though we've given a lot of incentives in that sector, it's not responded as we have expected it, but I believe that with the new orientation that we are bringing, giving some stimulation to the private sector in terms of ensuring that as a priority for goods manufactured in Ghana, if government is procuring good, it should give Ghanaian manufacturers the first priority so that they can have a guaranteed market that allows them to expand their production and employ more young people in the process”.

President Mahama further stated: “We'll also activate the industrial development plan that we talked about and this time our intention is not to give money to manufacturers but if you have a manufacturing enterprise and you need additional equipment to expand your production and employ more people, then what government can do is to give you the guarantees to establish the LCs to expand your factory so that you can employ more people and so we'll do it together with the Association of Ghana Industries; the stakeholders in that sector and I'm sure that it will give a boost to the work we are doing”.