Why EFCC is after Oronsaye …The NFIA Connection 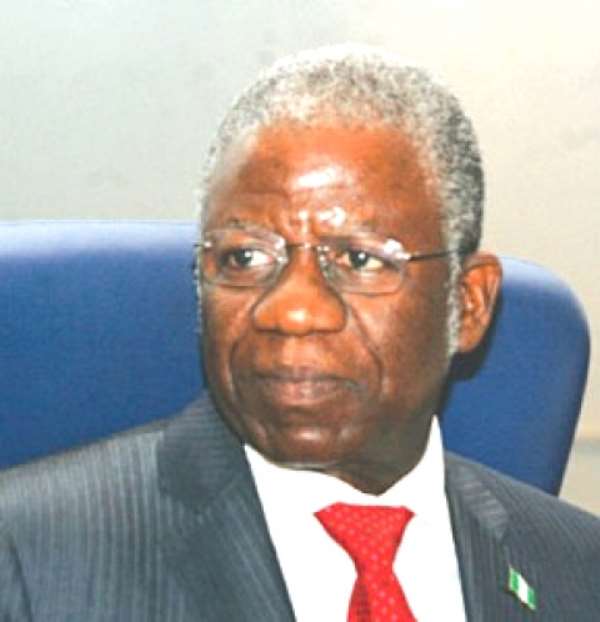 Why EFCC is after Oronsaye
…The NFIA Connection
Azeez Abdul
Facts have emerged on why the Economic and Financial Crimes Commission EFCC has declared war on Nigeria's former head of Service, Mr. Stephen Oronsoye.

An impeccable source at the Commission who spoke to our correspondent on the grounds of anonymity expressed displeasure over what he described as witch-hunt and blackmail of an innocent senior citizen by the leadership of the EFCC.

According to him, “This is a set-up to tarnish Mr. Oronsoye's name for the following reasons: He personally wrote a letter reporting our Pension Reform Task Team (PRTT) findings to EFCC, which resulted in the prosecution of one Mrs. Chidi and Dr. Shuaibu.

“Why is it that after EFCC closed investigations in the Pension case in 2010, arraigned the subjects in 2011, obtained a “negotiated judgment” on one of the pension suspects in 2013, the Chairman in an obvious show of incompetence is now seeking to reopen the investigation by claiming that one of the suspects “wrote an additional statement” to include Mr. Oronsaye?

“For the benefit of those who have not been following the pension case –Mrs. Phina Chidi is the lady who has been covering her face in all the pension trial cases. This is a woman whom, investigation reports showed glaring evidence of her involvement in moving money from pension accounts using “her under-aged children”. How can a woman who ought to have been convicted all of a sudden become a star witness for the EFCC? Did the woman suffer from hallucination? Was she under duress after three years to forge a story against Mr. Oronsaye? Why now? Nigerians are not asking questions.”

“We are all aware that Mr. Oronsaye started the investigation of Pension fraud when he became head of Service. It is also a fact that can be checked out that he set up the Pension Reform Task Team (PRTT) before he retired in 2010. He also personally submitted the final report of that task team to EFCC and ICPC and invited them to investigate and prosecute those indicted before he retired. How come the complainant is now being witch hunted? Instead of prosecuting all those found guilty, EFCC is now turning to claim that it has evidence to prosecute Mr. Oronsaye –forged evidence generated by his 'selected investigators' from the North, including Mr. Mustapha Abdurrahman and Mr. Mustapha Gadanya, a younger brother to Mr. Tahir, who, not only was a staff of Mrs. Chidi, but who has been dismissed from civil service for conspiring with Mrs. Chidi to steal Pension fund? Why is EFCC making a charade of such an important case?”

“Mr. Oronsoye is the chairman of the Presidential Committee on the Financial Action Task Force. He recommended the merger of the EFCC with ICPC and has been in support of the autonomy of the Nigerian Financial Intelligence Unit, a unit presently under the EFCC which has been battling the Commission for autonomy. The bill for NFIU autonomy has passed through a second reading in both the Senate and House of Representatives and what do you think that EFCC will do when it is obvious that the largest international donor funding comes to EFCC because of NFIU. Nothing in the whole story is either true or close to the truth.”

Continuing, the source lamented over what he described as criminal intimidation of innocent Nigerians, while the actual criminals in the system are allowed to walk the streets freely.

Reacting to a recent publication alleging that Mr. Oronsaye was involved in the diversion of N6.2b pension fund, a legal Practitioner, Barrister Mike Obasi described the report as an insult on the intelligence of Nigerians.

According to him, the report which stated that Mr. Oronsoye was grilled following a statement made by a Deputy Director, Pension Account in the office of the head of service, Mrs. Phina Chidi is a clear manifestation of set-up.

“Mrs. Chidi was said to have informed EFCC interrogators that she was given a mandate to shop for contractors who could make returns to the former Head of Service in the award of fictitious contracts which cost the country N5bn. She did not show any evidence of the mandate. In the Civil Service, instructions are communicated through formal memo.”

“She alleged further that the returns were made to Oronsaye through Shuaibu. Where is the evidence that there was such a transaction”?

“The said contracts were awarded between January 2009 and November 2010 when Oronsaye was Head of Service. Why did it take the EFCC three to four years before they realized it”?

“She alleged that the proceeds from the phoney contracts were paid into the accounts of two new generation banks before they were withdrawn by Shuaibu and taken to Oronsaye. You mean, he withdrew over N6b cash and delivered to Mr. Oronsoye? How is that possible? Do they think that Nigerians are fools?”

Continuing, Obasi queried why it took an additional statement after three years for Mrs. Chidi to try to robe in Mr. Oronsoye, describing it as born out of malice waxed in destructive swaggeo.

“If you read the report, Mrs. Chidi was quoted as saying, “In addition to my statement on January 11, 2011, I wish to state as follows: that I was asked by Dr. Shuaibu to shop for company names to execute our contracts, proceeds of which should be given to Mr. Stephen Oronsaye the then Head of Service.”

“After three years of her statement to the EFCC, she now remembered that Mr. Oronsoye should be included? This is a clear case of afterthought. Even a little child will clearly see that it is a set up. I am a lawyer and I can authoritatively tell you that the woman is being used to set the man up.”

Also reacting to the development, a human rights activist, Kazeem Abubakar condemned what it described as the loss of focus by the EFCC under the present leadership.

He revealed that Civil Society Organisations in the country are presently reviewing the activities of anti- corruption agencies in Nigeria, with the view to sanitizing them.

He further accused the EFCC under the present leadership of high level corruption and intimidation of innocent Nigerians, even as he accused it of encouraging corrupt practices in Nigeria.

Adding his voice, a Professor of Mass Communication and Public Relations consultant, Steve Akintoye lamented over what he described as a decline in the ethics of the Journalism profession.

He wondered why media practitioners go to Press without crosschecking their facts and asking relevant questions, siting the case in question, which report he said lacked substance, for not conducting proper investigations, asking the necessary questions and getting the other side of the story.

All efforts to reach the EFCC head of Media, Wilson Uwajuren for comments proved abortive.