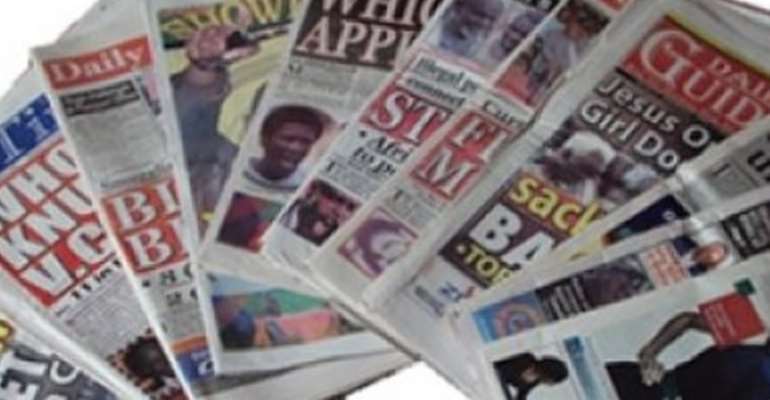 Many private senior high schools (SHSs) in the country may not get enough first year students for the 2013/2014 academic year.

OYE LITHUR APPEARS BEFORE DATE-BAH COMMITTEE
The Gender, Children and Social Protection Minister, Nana Oye Lithur, has appeared before the Justice Samuel Kofi Date-Bah Committee to respondent to her alleged influence of a decision in a recent Supreme Court Judgement on the 2012 election.

NO BUDGET FOR DISTRICT LEVEL ELECTIONS IN 2014
Although the Electoral Commission (EC) is to conduct and supervise district level elections next year, no budgetary provision has been made for the exercise in the 2014 Budget.

PENSION FUNDS INTACT - SENANU
The National Pensions Regulatory Authority (NPRA) has given an assurance that funds contributed into the tier-two pensions fund are intact, not misused but being invested at the Bank of Ghana (BoG).

Business and Financial Times
'WE NEED AN ECONOMIC REVOLUTION'
Dr Kofi Amoah, the development economist and entrepreneur, says Ghana requires a new approach to economic development - one that is founded in a national plan or strategy that seeks to maximise the benefits from the country's abundant natural resources.

INVESTMENT MARKET VIBRANT
Fund Manager of the Christian Community Mutual Fund (CCMF) Charles Adu Boahen says the country's investment market has bright prospects, and there's a need for the public to actively invest in the sector so as to fully share in the benefits.

TECHIMAN TOMATO FACTORY OPENING SUSPENDED
The commencement of operations at the Techiman Processing Complex (TEPCO), a tomato processing plant at Techiman in the Brong Ahafo Region, that was scheduled for this year has been deferred to June 2014.

Daily Guide
VICTORIA HAMAH DODGES CJ COMMITTEE
The probe committee commissioned by Chief Justice Georgina Theodora Wood to investigate the nine-member Supreme Court Justices, who sat on the 2012 Presidential election petition, over the allegation of influence, may be winding up its activities without the active cooperation of Victoria Hamah, the person at the centre of the controversy.

NPP SUMMONS APRAKU
Dr Kofi Konadu Apraku, a presidential hopeful, has been summoned to appear before the Council of Elders of the New Patriotic Party (NPP) over his recent scathing comments about the party.

COURT DECIDES ON AWUNI
An Accra Commercial Court will today rule whether Andrew Awuni, the executive director of Centre for Freedom and Accuracy and a contributor to Social Security and National Insurance Trust, has the capacity to bring an action against the sale of Merchant Bank.

Claiming they have been taken for granted for so long, a number of youth groups coming out of the New Patriotic Party have now decided to take top positions in the party in order to "correct mistakes of some of [their] leaders".

VRA LOSES $50M IN 5 MONTHS?
Sources working with the Thermal Power Plant 3 (T-3) have told The Finder on condition of anonymity that the undue pressure piled on engineers during installation was to blame for current predicaments of the plant.

Domestic airlines operator Starbow says bad weather was responsible for their inability to fly to Tamale, starting from Monday December 16, 2013.

Daily Heritage
LAMENTATION OF MINISTER: AG HAS ONLY 190 STATE ATTORNEYS AND PROSECUTORS NATIONWIDE

The Minister of Justice and Attorney General (AG), Marietta Brew Appiah-Oppong has expressed deep worry over what she describes as understaffing of her department of her department which according to her is affecting the quality of service delivery at the ministry.

The Parliamentary Select Committee on Roads and Transport has urged the Ministry of Roads and Highways to sack toll booth attendants and replace them with technologies to help check revenue leakage.

AWUNI, LITHUR FACE JUDGEMENT TODAY
The fate of the Executive  Director of Centre for Freedom and Accuracy, Andrew Awuni who petitioned the court to stop further transactions of the sale of the Merchant Bank to Fortiz Private Equity Fund would be determined today.

Today
PLOT AGAINST CHIEF OF STAFF; BABA KAMARA LURKS AROUND THE SIDELINES

His appointment as Chief of Staff was perhaps the most unpopular decision that nearly disorganised at birth the foundation of the administration of President John Dramani Mahama.

The New Statesman
I WILL CONTEST AKUFO-ADDO - ARTHUR K REVEALS
Arthur Kobina Kennedy  has finally let the cat out of the bag, confirming speculations making the rounds that he was preparing to contest for the second time as the Presidential candidate of the New Patriotic Party.

A Peace Advocate, Samuel Ampomah, who is chairman of Advocacy for Peace and Friends of the Needy, yesterday filed a suit at the Supreme Court challenging the decision by the Mahama-led Government to cut the pay of Judges and Magistrates of the nation's Lower Courts by over 50 percent.