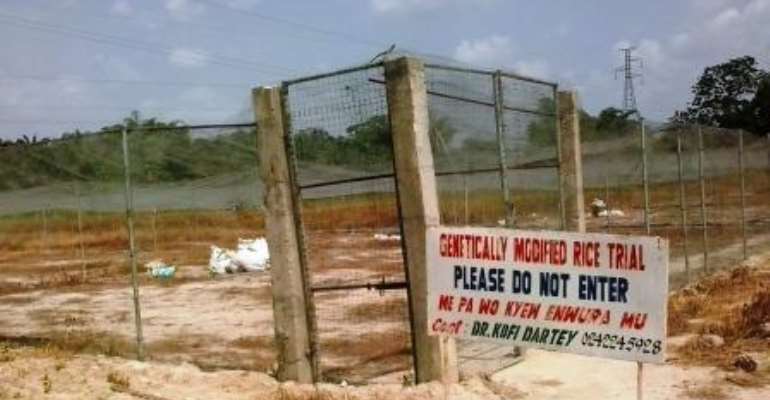 Commercialization of genetically modified rice in Ghana will not happen within the next five years, based on projections of breeders at the Crops Research Institute (CRI) of the Council for Scientific and Industrial Research (CSIR).

Trials of the Nitrogen Use Efficient (NUE) Rice – the first-ever genetically modified (GM) crop to be planted in Ghana – took off on confined fields in the Ashanti region early 2013.

“Here we are dealing with nitrogen use efficiency because the farmers cannot apply the recommended rates of nitrogen; we are trying various events (i.e. rice lines) which have been modified to make good use of the little nitrogen in the soil. If we have an event which is good, we can release it as a variety per se or cross it with an adapted variety,” explained Plant Breeder, Dr. Maxwell Darko Asante.

It has taken 120 days to harvest the royalty-free rice seeds from the confined fields.

“We have to winnow it, dry it and weigh it before we can draw a conclusion,” says Dr. Kofi Dartey, who is leading the GM Rice project.

He is hopeful the analysis of the harvested rice seeds would be completed before end of year, but says it will take between 3-5 year before the produce leaves the confined fields.

The objective of the trials is to look at how farmers can maximize yields per bag of applied fertilizer to enhance Ghana's food production.

“It's very important because our farmers are not able to buy fertilizer, so if you have rice which is able to use nitrogen more efficiently, it's going to give them higher yields,” Dr. Darko Asante noted.

The next trial, he stated, will combine genes for three traits – nitrogen use efficiency, water use efficiency and salt tolerance. This could help farmers spread rice cultivation to marginal areas.

“Once we identify the best events, we either go through the normal varietal release procedures to release that as a variety or we cross them with our adapted variety to introduce the genes into a variety like Jasmine which is already popular,” said the rice breeder.

There is growing controversy between some food experts and civil society organisations over the introduction of genetically modified (GM) food into Ghana.

Dr. Darko Asante however says the safety of GMOs cannot be compromised due to the strict legal regime.

“You have to go strictly by the bio-safety law… so for me they are even safer than the conventional because for the conventional we cross anything and nobody controls us but for GM you have to go through lots of strict controls, so any variety that is passed by the regulatory authorities for release is safe,” he stressed.