Mahama should do his job and stop demanding praises 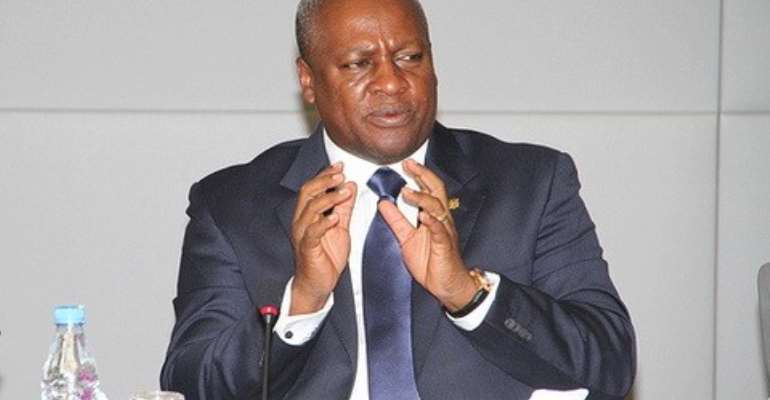 President John Mahama's call on Ghanaians to eschew cynicism and acknowledge the economic gains made under his administration are misplaced, a Political Lecturer has said.

Dr. Richard Amoako Baah says the President must do the job for which Ghanaians employed him and stop demanding praises.

He was speaking on Joy FM's Super Morning Show Monday in response to President Mahama's appeal to Ghanaians last weekend to refrain from being cynical and appreciate the strides being made by the country under his tutelage.

He made reference to the energy crisis that hit the country earlier this year and said, “in Ghana, we have a very short memory; the energy crisis is solved, we don't remember the darkness we were in and so we've put that behind us and we are looking at what the other challenges are.”

But Dr. Amoako Baah, who is the Head of the Political Science Department of the Kwame Nkrumah University of Science and Technology (KNUST), said Ghanaians are entitled to uninterrupted supply of power and that the president did Ghanaians no favour by ensuring they have that.

“Electricity should be taken for granted…it is the first thing that the nation must sure works because everything is based on it, everything is dependent on it; and so when you fix it don't expect praises from anyone; besides it is not his money that he used to fix it,” he stated.

The University lecturer said “We employed him in that position to do that job and so if he is doing his job, he should not expect praises from us.”

Dr. Amoako Baah said even though the President may have meant the comments as a joke, he ought to have known that the nation was not in the mood for jokes.

“It is almost as if he (the President) is not in touch with what is happening…people are suffering, the economy is going down, inflation is going up…where is the bright spot that people are supposed to look at, celebrate or to praise the president for”?

In his view, the President has lost goodwill and must not be making comments that can be picked on by his opponents.

Former Head of Policy Monitoring and Evaluation, Dr Tony Aidoo, also speaking on the show, said President Mahama was not the first leader to make such comments.

He said Mr. John Kufuor as president made similar comments when Ghanaians complained about harsh economic conditions in the country in 2003.

Dr. Aidoo said even though Ghanaians had a right to constant power supply, “we live in a third world (country) and in a third world [country] we are so handicapped materially in terms of economic growth.”

He insisted that some of the criticisms leveled against the president for his comments were indeed cynical.

Eligibility Age to become President of Ghana: Lessons from t...
1 minute ago