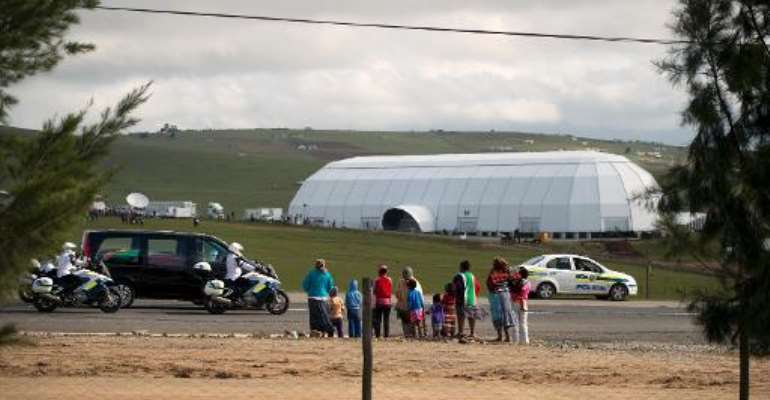 The hearse carrying the coffin of former South African president Nelson Mandela passes the dome funeral venue set up for tomorrow's funeral in Qunu, on December 14, 2013. By Pedro Ugarte (AFP)

Qunu (South Africa) (AFP) - From the confines of apartheid prison and during the ill health that stalked his last years, Nelson Mandela yearned for the rolling hills and open spaces of his boyhood village of Qunu.

It was here, in South Africa's rural hinterland, that the man who went on to shape the destiny of the country took up his first responsibility as a five-year-old herd boy.

The young Mandela's days were filled with stick-fighting, sipping warm milk from cows' udders, fishing and sliding down a rocky slope with friends.

Bed was a mat on the floor of one of the three thatched, mud-walled round huts in his mother's homestead. Meals were cooked on open fires with food harvested from the family garden.

"From these days I date my love of the veld (grassland), of open spaces, the simple beauties of nature, the clean lines of the horizon," Mandela wrote in his memoir "Long Walk to Freedom".

Qunu, he said in an unpublished draft of the memoir, was "the sweet home where I had spent the happiest days of my childhood."

It was also where he got his English name "Nelson" on his first day at school, to which he wore a cut-off pair of his father's trousers to replace the blanket that village boys wore.

"Throughout my imprisonment my heart and soul have always been somewhere far beyond this place, in the veld and the bushes," he wrote from Robben Island jail in 1970.

Mandela returned after 27 years in prison as a free man to Qunu, where his parents and children were buried, and found the village's poverty a shock.

He built his retirement home modelled on the familiar layout of the prison house of his last years of incarceration, next to a busy highway along which minibus taxis, buses and cars constantly thunder by.

In his final years, he spent large parts of his time here, until ill health forced his absence, symbolised by lowered flags at his home.

In his final months, his beloved village was the focal point of a an ugly family feud over the location of his final resting place.

"Whoever reads letters to his family, whoever reads 'Long Walk to Freedom' will find evidence of how Qunu lives in his emotional attachment to his identity," his wife Graca Machel wrote in a court affidavit.

As recently as January, soon after an 18-day hospitalisation, he called for his boots when one of his oldest friends George Bizos arrived to visit him in Johannesburg.

"'What do you want your boots for, Tata (father)?' one staff member asked. 'George is here. He will take me to Qunu," he answered'," recounted Bizos.

It was clear, Bizos said, that he wanted to go home.

Electricity, water, tarred roads and brick houses have brought change to Qunu, where he moved from his nearby birthplace of Mvezo and then left before he was 10.

But the grassy hills where he roamed nearly 100 years ago remain a place of scattered homes and footpaths, where time slows to the unhurried rhythm of village life and tradition.

Echoing his footsteps, children still tend to cattle and sheep.

Monuments have been built across the world in honour of the anti-apartheid icon.

His death has drawn the world's attention and throngs to Qunu. But there are no statues of him here -- just a hilltop museum which celebrates and explores his life.

Revered worldwide, Qunu's world-famous citizen like his fellow villagers fell under the authority of the local chief, a woman whose home lies across from his.

Regarded as a hero but also a fellow villager, his neighbours were known to pop in unannounced, just as he would take impromptu walks through the village.

"Even now it's something different for me to go to Qunu... there is a different dimension all together," he once said.