Education In Akwa Ibom State In Shambles, As Student Write Exams Under Leaked Roofs And Rains 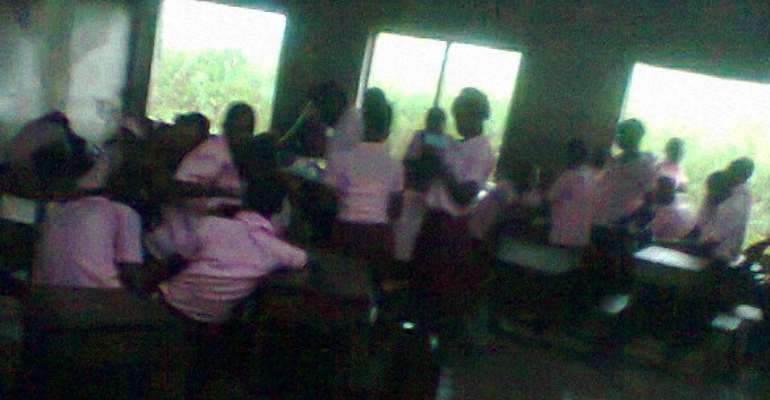 Mkpat Enin: Students of Edu Secondary School in Ikot Edeghe Mkpat Enin local Government Area of Akwa Ibom State have decried the suffering they are passing through over what they called “cursed educational system in the state”.

The students who came out of the terminal exams absolutely wet and drained complained bitterly of the neglect of the school, perforated roofs and poor management for more than ten six years.

One of the SS2 students currently writing terminal exams who gave her name as Ima said this had been their fate since she started this school five years ago. She said most of the students failed the West African School Certificate (WAEC) exams woefully as a result of perennial leakage of the school roofs during exams, neglect; as they battle with the rains during classes and exams.

“This is how the past students sat and wrote their WAEC examinations as most of them got F9 and mere pass grade and very few of them manage to have credit in few subjects. I and a few friends of mine have vowed not to take our final exams in this school if there's not hope for any change.

We have already told our parents this; and they're making arrangement for us to move to another school. I know it is going to be expensive, but we are not going to bother about since our parents have accepted it.'' Ima cried.

Our correspondent met with one of the ex-students, Master Imo Udo, who came to collect his WAEC and NECO results. He initially refused to speak to us but later granted us audience. Master Udoh said he had already predicted the poor outcome of the results because the science laboratory has been abandoned due to lack of facilities and leaked roofs.

He called on the government to do something urgently about the school. He expressed surprise that, no change has been made to the school since last year, even with the Deputy Governor, Lady Valerie Ebe who is from that very village.

“I pray that government of Akwa Ibom State would come and renovate this school. Why are we shouting 'free and compulsory education' every day when schools are in deplorable condition in our state? What baffles me the more is that, the new deputy governor, Mrs. Valerie Ebe is from this very village. I wonder if she is not aware of the rot in this school!

Effort to speak to the Principal, Mr. Joseph Ukpe did not yield any dividends as he was said to have travelled to Uyo for the All Nigerian Conference of Principals of Secondary Schools (ANCOPSS) meeting.

A little dram, however, surfaced when the reporters decided to take pictures of the schools and students who were writing a exams in the waterlogged classes and were sternly warned not to do so by an unnamed staff, else they would have their camera confiscated. But an ex-students decided to do justice by using his camera phone to take some pictures.