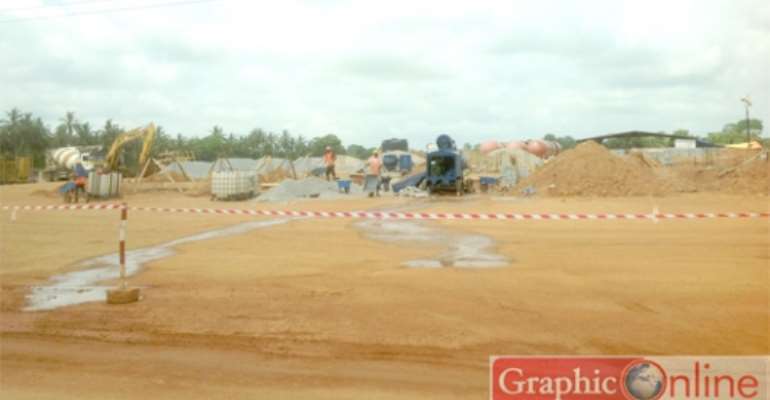 Residents in six coastal communities in the Ellembelle District in the Western Region have expressed concern over the siting of the country's gas processing plant at Atuabo, saying it poses a  danger to the communities.

They said the liquefied petroleum gas (LPG) terminal under construction by Quantum Terminals Limited fell outside the industrial zone of the district assembly.

The assembly has also threatened to take legal action against the company for not following the ground rules.

According to the chiefs and people of the communities, they had now been sandwiched between the Ghana Gas Company facility and that of Quantum Terminals Limited, adding that this posed a danger to their safety.

It was observed when the Daily Graphic visited the area that the closest residential facility to Quantum was less than a minute walk (less than 25 seconds drive at 40km/hr) from the Annochie township.

The project is also located close to the main road which connects the six communities.

The Chief of Annochie, Nana Avo Blay V, said the town was growing and that he did not understand why it should be taken over by facilities that needed to be separated from human settlement.

“What we want now is that the Quantum Gas Terminals should relocate to the other side of the pipeline. Where they are siting it now is not good for my people,” he said.

Nana Blay said the people were aware of the dangers associated with gas explosions, and wondered why the Environmental Protection Agency (EPA) should allow the project to go on.

He said the EPA should have known that siting the project next to the community and using the only road to haul the product would be dangerous.

“As it is now, realising danger, we don't want the Quantum project near us. They should go beyond the pipeline, and after that construct their own road to link the main road to ensure the safety of the people,” he said.

“Aside the Quantum, Ghana Gas has also informed us of siting a  loading gantry also very close to the community, but we will resist it. They should go beyond the gas pipeline,” he said.

Nana Blay said it was wrong for them to allow the companies, including the Ghana Gas, to flood the communities with dangerous gas infrastructure without considering the dangers associated with LPG.

“As we speak, if they finish the gas terminals, they would lay a pipe from Ghana Gas to the facility, which will pass through the community, and they want to tell us we are safe?” the Tuffuhene of the community, Mr Robert Awoni-Mensah asked.

The Assembly Member for the area, Mr Daniel K. Boma, said there were several concerns about the location of the facility, describing such concerns as genuine.

He said consultation among the communities was poor.

When contacted, the District Chief Executive for Ellembelle, Daniel K. Eshun, acknowledged the concerns of the people, saying that the industrial enclave for the area was between Atuabo and Annochie.

He said he was surprised the company had moved to an area that formed part of residential facilities to construct the terminals without contacting the assembly.

“We have to go there and call them to order. They met the chiefs and failed to come to the assembly, hauling sand and constructing equipment to the site without permit, and I have not even seen their environmental impact assessment document,” he said.

Meanwhile, according to the Chief Executive Officer of the Ghana National Gas Company, Dr George Sipa-Adjah Yankey, Quantum Terminals was a private initiative which was not part of the Ghana Gas Project.

He said it was not surprising that people were expressing their displeasure at the location because of its closeness to the community and other issues such as the taking over of people's lands.

“But the question to ask is who sold the land to the company, and why must it be sited next to the community,” he asked.

Dr Sipa-Yankey said the focus of the Ghana Gas Project was different from that of Quantum Terminals, adding that the chiefs and people of the communities who owned the land were at liberty to express concern over the project.

He said the location of Ghana Gas was thoroughly researched, discussed and the due processes followed; therefore, the operations of Quantum should not be linked to that of Ghana Gas.

He denied allegations that Ghana Gas was working together with Quantum.

He noted that the safety of the host communities was of great interest and that Ghana Gas was within the acceptable limit from the next community – Annochie.

Efforts to reach the Quantum Terminals Limited for their reaction did not yield any result.