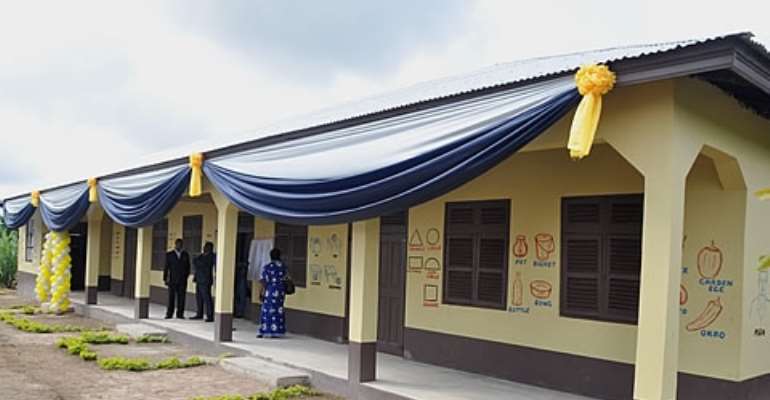 Ghana Commercial Bank Limited (GCB) has handed over an ultra-modern five-unit  classroom facility constructed by the Bank at a cost of GHC37,596.00 to the Fawoman D/A Primary School at Fawoman in the Ahafo Ano South District of the Ashanti Region.

The facility is made up of two classrooms, a sleeping room, a kitchen  and bathroom and a place of convenience for the nursery and kindergarten unit of the Fawoman D/A School.

The project was executed within a year as part of the Bank's corporate social responsibility project under its 60th anniversary celebrations.

The Bank provided funds while the chiefs and people of Fawoman contributed communal labour.

The construction of the school followed a May One, 2012, publication in the Daily Graphic on the plight of some 110 children aged between three and seven years studying under disaster-prone structures. The structure which accommodated KG1 and KG2 pupils of the school was constructed in 1987 by the Fawoman Community to serve as a workshop for technical subjects under the Junior High School project. Following the malfunctioning of this workshop, pupils of the Kindergarten who were then studying under palm branches were moved into the workshop structure. The dilapidated structure made teaching and learning very difficult as classes were disrupted by unfavorable weather conditions.

The Managing Director of GCB, Mr. Simon Dornoo, speaking at the commissioning of the project, announced plans by the Bank to partner the Non-Bank Financial Institutions (NBFIs) in the country to provide banking services, particularly to those in the rural communities.

He said Ghana's banking landscape has been characterised by significant changes  over the last 15 to 20 years, driven by regulatory changes, technological advancement  and competition.

“About 60 years ago, rural banks and micro finance companies were non-existent in  Ghana. Today we have over 300 of such NBFIs all over the country serving the local  communities.

GCB is adapting to this irreversible trend by seeking opportunities to collaborate  with these NBFIs to bring banking services to the communities in a more cost-effective  way,” Mr Dornoo said.

Oheneba Kwabena Acheampongtia II, Abrenyasehene and Nana Boakye Ampofo I, Chief of Fawoman together with the Board Chairman of GCB, Dr Fritz Gockel, cut the tape to commission the project.

Nana Boakye Ampofo commended GCB for going to the aid of the community and appealed to the Bank to set up a scholarship scheme for the children of the area to attain higher education.

He also appealed to the Bank to set aside a fund for the maintenance of the new complex while considering the possibility of constructing a health post in the community.