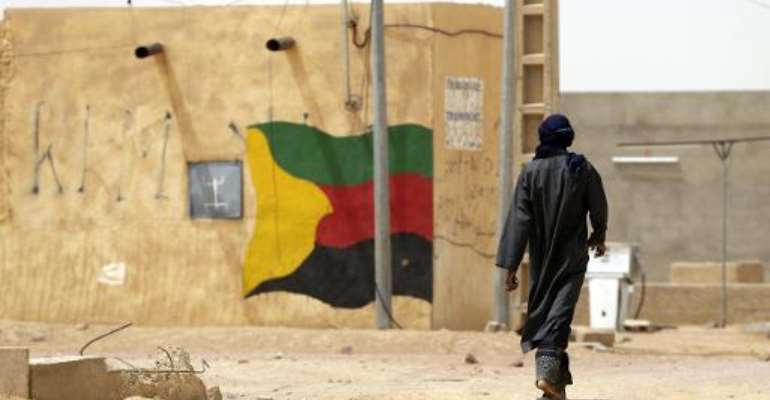 This picture taken on July 27, 2013 shows a man walking past a flag of the National Movement for the Liberation of Azawad (MNLA) painted on a wall in Kidal. By Kenzo Tribouillard (AFP/File)

Bamako (AFP) - Public radio and television has restarted after nine months off the airwaves in Mali's northeastern rebel bastion of Kidal, the state broadcaster said on Wednesday, after separatist militants handed back its local headquarters.

ORTM was forced off air by rebels from the National Movement for the Liberation of Azawad (MNLA) when they took control of the Kidal region and its capital of the same name.

"Thanks to our viewers and listeners who have been receiving our programs in Kidal once more over the last few days," ORTM radio and TV presenters said.

ORTM confirmed the resumption of broadcasting in much of the region, stating that a small team of journalists and technicians had taken up their posts again in Kidal city.

"For the time being, only programmes produced in Bamako are being broadcast in Kidal and the region. Soon we will, as in other regions, allocate a few hours a day to local programming," ORTM chief Bally Drissa Sissoko told AFP.

The ORTM building in Kidal had become a symbol of the MNLA's separatist struggle but they handed it back in November, in line with the terms of a June peace deal for the troubled west African country.

The accord opened the way for a presidential election to be held in Kidal along with the rest of Mali, and the second round of parliamentary elections are due to be staged on Sunday.

Up until the agreement, the MNLA had refused to allow any government soldiers or civil servants into the desert town.

The presidential election -- won by Ibrahim Boubacar Keita, who was sworn in as president in September -- was seen as a key step in restoring stability in Mali.

The country descended into crisis in January 2012, when the MNLA launched the latest in a string of Tuareg insurgencies in the north.

A subsequent coup in Bamako led to chaos, and armed Islamist extremists linked to Al-Qaeda overpowered the Tuareg to seize control of Mali's northern half.

A French-led military operation launched in January ousted the extremists, but allowed the MNLA to retain day-to-day control of much of Kidal, and the Tuareg demand for autonomy has not been resolved.