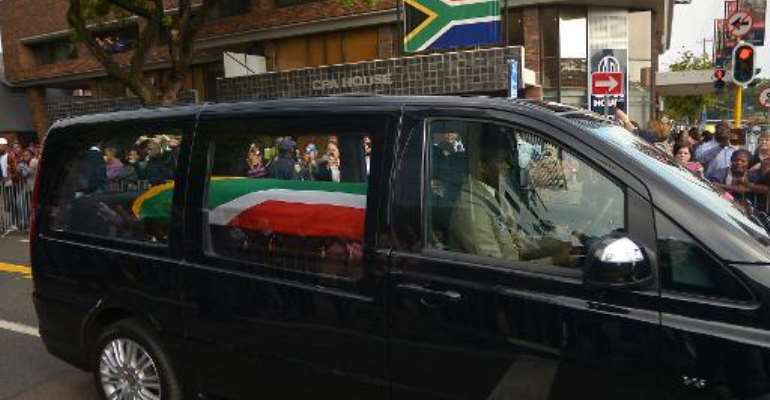 The funeral cortege of South African former president Nelson Mandela drives through the streets in Pretoria on December 11, 2013 to the Union Buildings to mark the start of a three-day lying in state. By Filippo Monteforte (AFP)

PRETORIA (AFP) - Nelson Mandela's family gathered around his open casket Wednesday, marking the beginning of three days in which the former president will lie in state.

Mandela's coffin was placed inside the cavernous amphitheatre of Union Buildings -- South Africa's seat of government -- on a cubic platform.

His coffin was carried up the steps toward the towering acropolis of beige freestone, trailed by Mandela's oldest grandson, Mandla Mandela.

His manifest grief was a poignant reminder that while the nation lost a hero, Mandela's family lost a father, grandfather and husband.

After the family had paid their respects, Mandla sat inside ready to receive presidents, celebrities and other dignitaries.