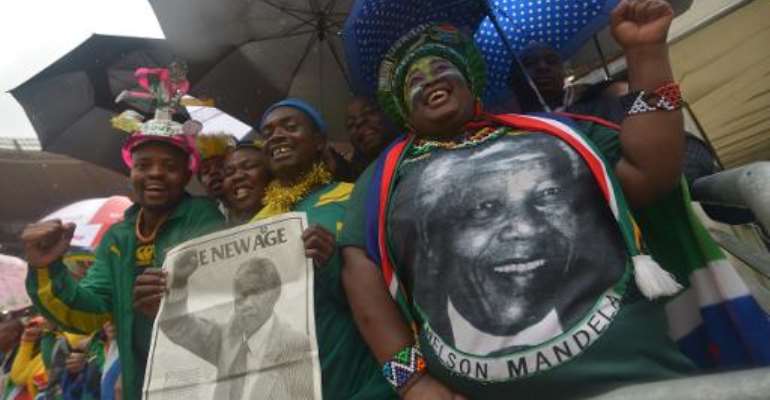 People hold portraits of Nelson Mandela during the memorial service of the South African former president at the FNB Stadium in Johannesburg on December 10, 2013. By Alexander Joe (AFP)

Pretoria (AFP) - South Africans will form a sombre guard of honour Wednesday for the funeral cortege of their iconic leader Nelson Mandela as it passes through the streets of Pretoria on a journey laden with symbolism.

The government has encouraged the public to turn out in force and line the route from the city's 1 Military Hospital to the Union Buildings where Mandela was sworn in as their first black president nearly 20 years ago.

The procession marks the start of a three-day lying in state, to give ordinary South Africans the chance to say a final, personal farewell to the man who pulled the country into a modern, multi-racial age and away from the toxic era of apartheid.

Although Pretoria's population has become more diverse in recent years, the capital retains a strong presence of Afrikaners, descendants of the first Dutch settlers who arrived in the 17th century.

The cortege will pass near the one-time home of Paul Kruger, the father of the Afrikaner nation.

"Oom (Uncle) Paul" was the president of the Transvaal, leading a resistance movement against British rule during the first Anglo-Boer War., which began in 1880.

That Afrikaner nationalism later morphed into support the National Party, which introduced apartheid.

The funeral cortege route is also replete with landmarks that carry resonance in Mandela's own life.

The procession will pass the central prison where he was jailed in 1962 for incitement and leaving the country illegally.

Another landmark is the Palace of Justice, the court where Mandela famously stood trial in 1963-64 for treason and sabotage with 10 other co-defendants.

His conviction and subsequent life sentence marked the beginning of a 27-year jail stint, from which he finally emerged in 1990 as the structure of apartheid crumbled around its white minority supporters.

The funeral procession will be repeated for three days, ending each time at the Union Buildings -- the seat of government where previous presidents had signed aspects of the apartheid system into law.

The public will be allowed to view the casket each afternoon, before Mandela's body is transported to his boyhood home of Qunu in the Eastern cape for its eventual burial on Sunday.

The lying in state is expected to be a sombre, subdued affair compared to Tuesday's celebratory memorial service in Soweto -- the crucible of the anti-apartheid movement.

Tens of thousands of people attended the event in Soweto's World Cup stadium where US President Barack Obama led foreign tributes to the life and legacy of Mandela, whose appeal and influence spread far beyond his native land.

"It is hard to eulogise any man ... how much harder to do so for a giant of history, who moved a nation towards justice," Obama told the cheering crowd.

Mandela had been critically ill for months, but the announcement of his death on Thursday at the age of 95 was still a body blow to a country struggling with multiple social and economic challenges.

For many, Mandela -- even a frail, aged and retired Mandela -- represented, while he was alive, a moral beacon that retained the promise of better times ahead.

Current President Jacob Zuma was roundly booed by large portions of the crowd at Tuesday's memorial service, a sign of growing impatience with Mandela's successors to deliver on promises of equality and prosperity.

Two decades after the racist apartheid regime was consigned to history, millions of black South Africans remain poor, unemployed and without formal housing in a society that is among the world's most unequal.