Mandela was a magician: Tutu 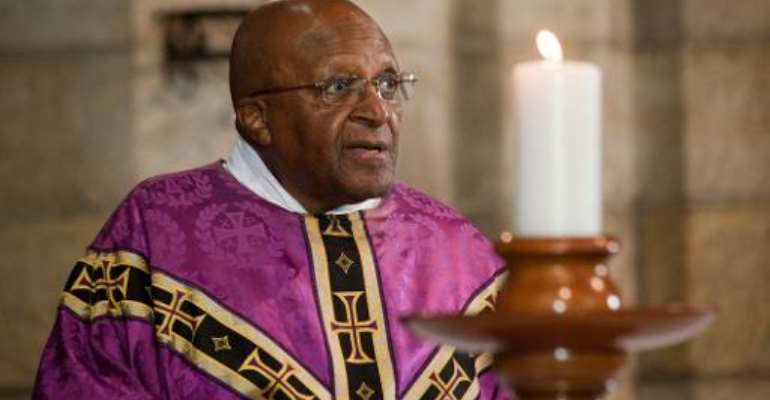 Archbishop Emeritus Desmond Tutu leads a service in St. George's Cathedral on December 6, 2013, after the anouncement of the death of Nelson Mandela, in Cape Town. By Rodger Bosch (AFP/File)

Johannesburg (AFP) - Nelson Mandela was like a "magician" who conjured a united nation out of a country teetering on the brink of war, South African Nobel laureate Desmond Tutu said Monday.

"Everybody was saying we would go up in flames," the archbishop emeritus told a memorial service for Mandela in Johannesburg.

"He really was like a magician with a magic wand, turning us into this glorious, multi-coloured rainbow people.

"This repulsive caterpillar, South Africa, that used to be the world's pariah, he turned into a beautiful, beautiful butterfly.

"That is what we are celebrating," Tutu told hundreds of mourners of all races who filled the memorial venue for an emotional service.

Tutu said the world must not mourn his old friend's death, but rather celebrate his life and example.

"He emerged from that crucible of suffering and being dehumanised, breaking rocks... sewing post office bags, working in the quarry," during his 27-year incarceration under the apartheid regime's racial laws.

"But instead of being consumed by hate and a lust for revenge, (he became) a stalwart for reconciliation... and forgiveness."

The moving gathering ended with singer Johnny Clegg performing the track "Asimbonanga" he had written for Mandela in 1976.

The title means "We've never seen him" and refers to the long years Mandela spent in jail when all images of him were banned.